by Warren and Wignall Auctioneers
1/1 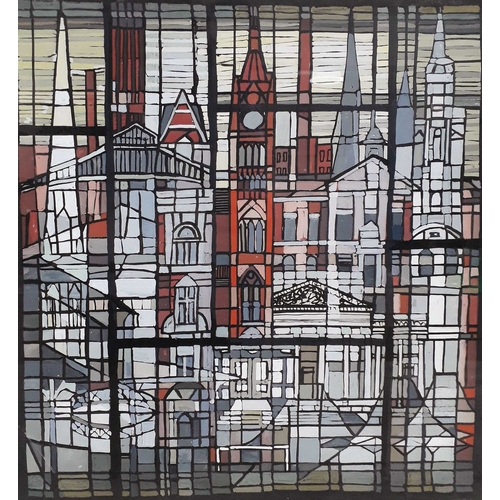 
Gerald Rickards was one of Wigan’s most distinctive and best-loved artists, specialising in
depicting buildings in his own distinctive style, from small private houses to large country houses.
Meticulous attention to details was an important feature in all his work. Paintings ranged from
semi-abstract oils, small watercolour studies, reinforced with line, to larger watercolour/gouache
compositions, murals and stained-glass design.
Born in Aspull, he lived in Billinge near Winstanley College (previously Up Holland Grammar
School) where he was Head of Art for 26 years. He was the first Artist in Residence at Drumcroon
Education Art Centre. Following early retirement, he devoted all his time to painting from 1985
until his death in 2006.
He was a student at Wigan School of Art and Liverpool College of Art followed by a post graduate
fellowship at Edinburgh College of Art where he was the prize winner for the most distinguished
work of college year. A travelling scholarship to study mural painting in Europe followed in
addition to work on the Diaghilev Exhibition for Edinburgh Festival and the Sunday Observer in
London.
Early work (1960-1975) featured semi-abstract oils, linear patterns adapted from plans of large
buildings and some religious motifs. The latter part of the 1970’s featured subjects which were
easier to recognise including mythological creatures and birds depicted in a decorative two-
dimensional manner with lots of detail in linear backgrounds. Later works featured parts of
buildings, with special attention given to detail, and the relationship between façade and
background. The traditional approach to perspective was avoided and subjects were often
repeated with variations of colour and arrangement.
He held over two dozen exhibitions at galleries in the North West, Midlands, Cambridge, London,
Salisbury & Norwich Cathedrals. All had a particular theme – National Trust properties, churches,
cathedrals, waterside buildings, Oxbridge colleges, Thomas Hardy etc.
Large scale works include the 37-foot Charter Mural in the History Shop, Wigan and a floor to
ceiling panel at Holgate School, Orrell. Other murals included Scottish Scout Headquarters,
Manchester Airport, Nantwich Post Office and Warwickshire College (open competition winner in
the last two). Also, a ten-section painting for Newnham College at Cambridge, a collection
featuring all the buildings in the Close at Salisbury and seven section painting of Rufford Old Hall.
He submitted the winning design for the 25-foot square Preston Guild window, designed and
painted the 15-foot high Queen’s Hall window in central Wigan, a window at Ince St Mary’s and a
3-setion stained glass project for Christ Church, Aughton.
His work was purchased by several educational establishments, local authorities, British
Waterways, National Trust, Newnham College, Blackpool Gazette, English Schools Athletics
Association and for private collections in many European countries, America and Australasia.

Prints were produced from several of the ongoing series, featuring national and local subjects, plus
a triptych commemorating the last rugby match at Central Park.

Provenance - sold on behalf of the Rickards estate. 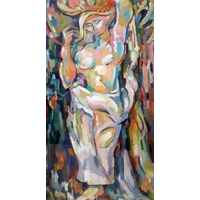 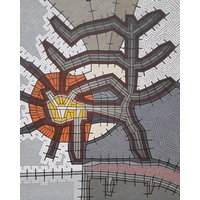