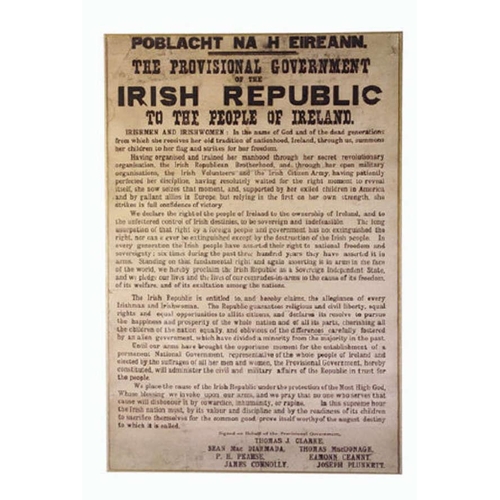 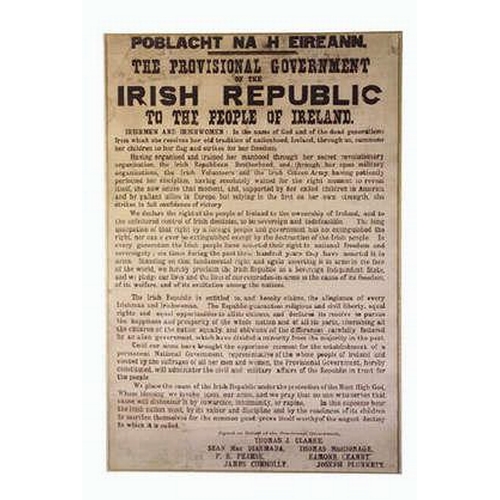 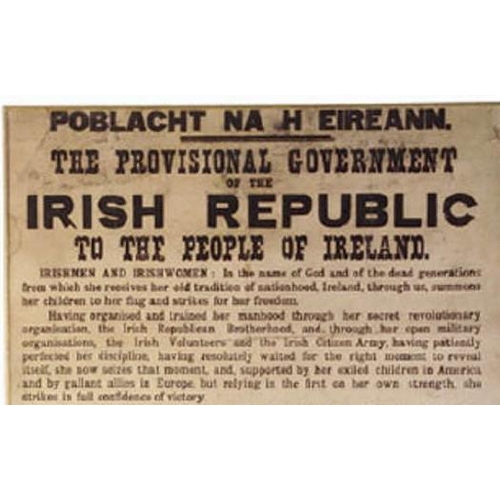 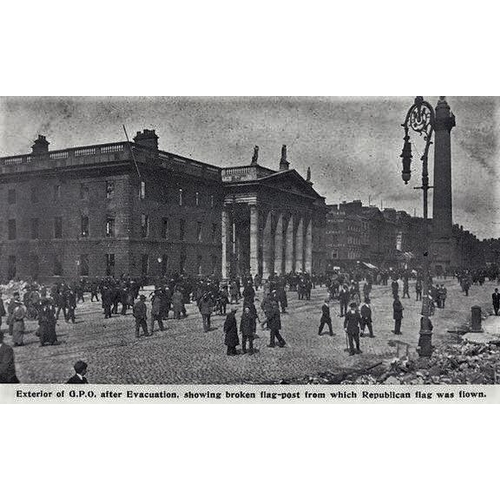 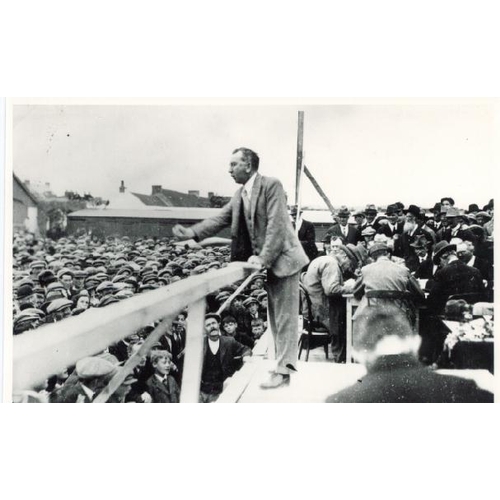 Original Easter 1916 Proclamation Foundation Document of Modern Irish Nationhood Single Broadsheet Printed Dublin, 23rd April, 1916
30 Inches High x 19.5 Inches Wide Approximately
'.. in the name of God and of the dead generations from which she receives her old traditions of nationhood, Ireland, through us, summons her children to her flag and strikes for her freedom..'
This rare survivor is the most important document in the history of the Irish Nation. Issued by the Irish Volunteers and the Irish Citizen Army, it was read by Padraig Pearse from the steps of the GPO on O Connell Street, Easter Monday Morning, April 24th, 1916. It is believed that Pearse originally wrote the document, with additional amendments before committing to print by James Connelly and Thomas McDonagh. Originally the Leaders planned to print about 2,000 copies in the basement of Liberty Hall, the headquarters of the Irish Citizen Army, and to distribute them nationwide on Easter Monday morning. However, difficulties in its secrecy of printing, and other problems, meant that only 500 or so were actually produced. A scarcity of paper (the paper used was of the poorest quality, supplied by Saggart Mills), and the metal-type employed, affected its layout and design. With not enough type to print in one-run, and the rollers refusing to apply even pressure throughout, the document was printed in two-halves onto the same piece of paper - printing first the top, then the lower half. Because they further lacked a sufficient supply of type in the same size and font, some parts of the document use es from a different font, which are smaller and don't quite match. That difficulty of applying even pressure to the sheet is also evident with smudging in some parts, and faint printing in others.
The copies that were printed were run-off a dilapidated Summit Wharfdale Stop Cylinder Press operated by three men: Christopher Brady, the printer, and two compositors, Michael Molly and Liam O Brien. These men were essentially kept under house arrest by Pearse during the setting and printing process so that it would appear to the British, if raided, that the printers were working under duress. The printing itself was supervised by James Connelly.
Of the 500 copies eventually produced, most were destroyed when the British Army stormed Liberty Hall. The few that remained with the Leaders were pasted up on public walls in and around Dublin on Easter Monday morning, public notice to all of Irelands declaration of independence from the United Kingdom. Of these, most were roughly destroyed very soon after being posted up. In fact it is now believed that only about 20 or so intact copies survived. Of these, about 3 still remain in private hands.
This copy, with some damages and repairs, including a mended tear which is to be expected, is a National Icon. And a poignant reminder of those turbulent days of revolution. Provenance: The late Mr. Brendan Brennan, Dublin. Adams, Dublin, Independence Sale 12th April 2006, Lot 404. 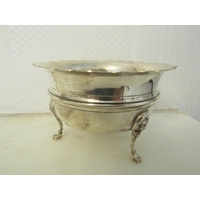 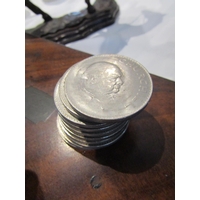