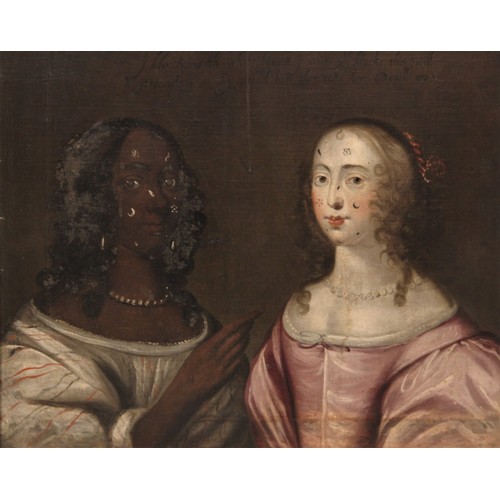 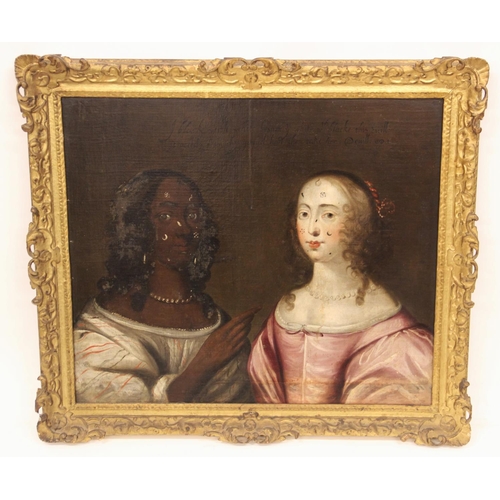 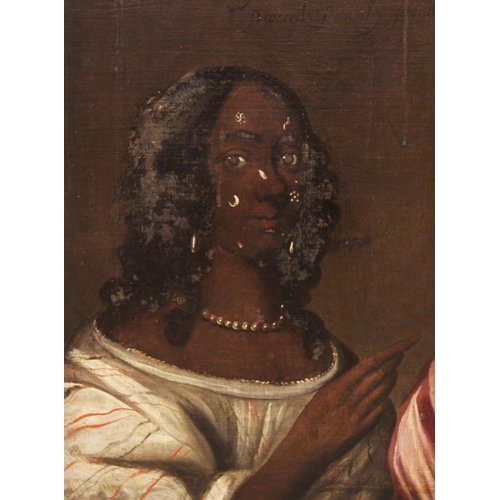 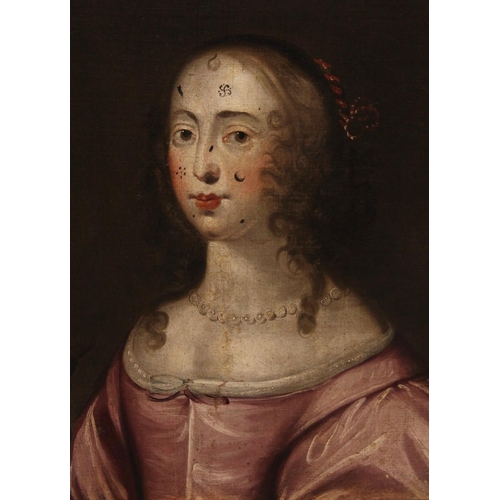 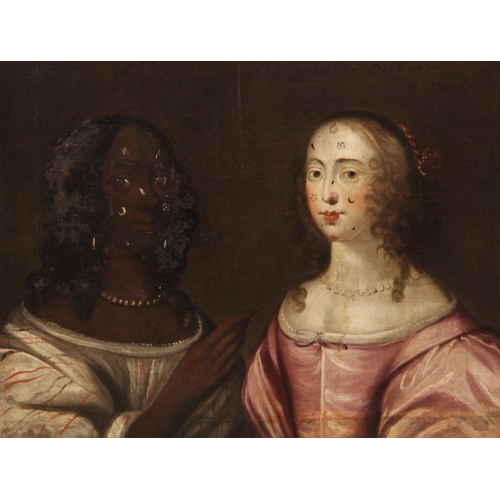 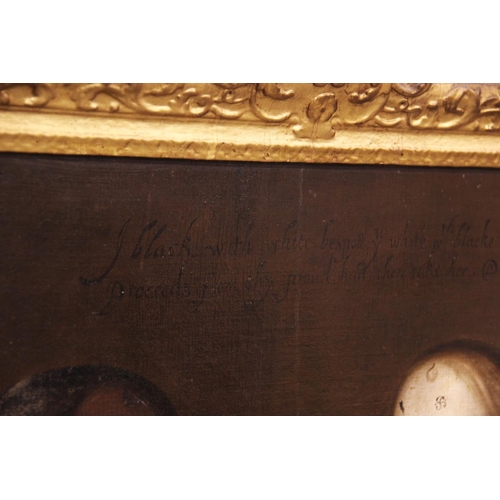 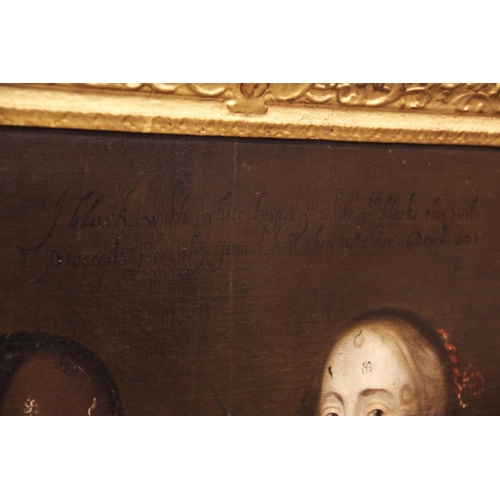 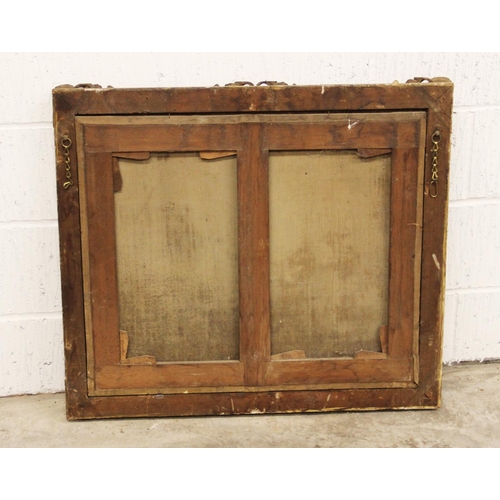 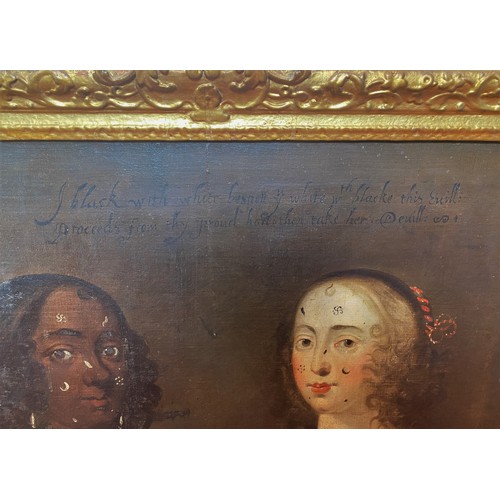 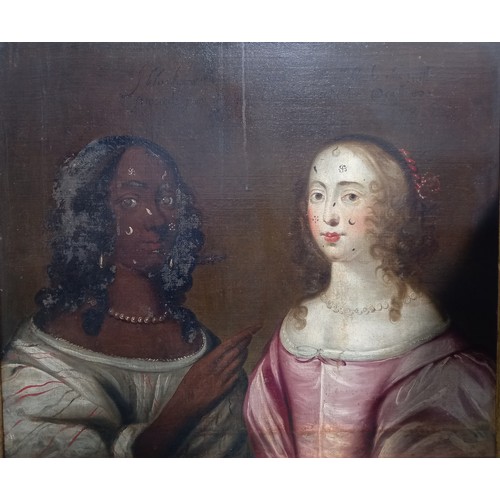 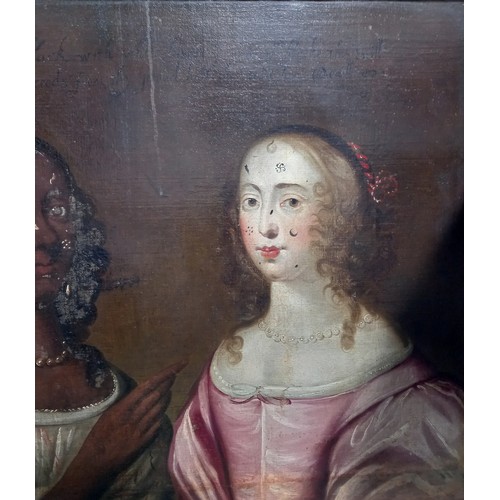 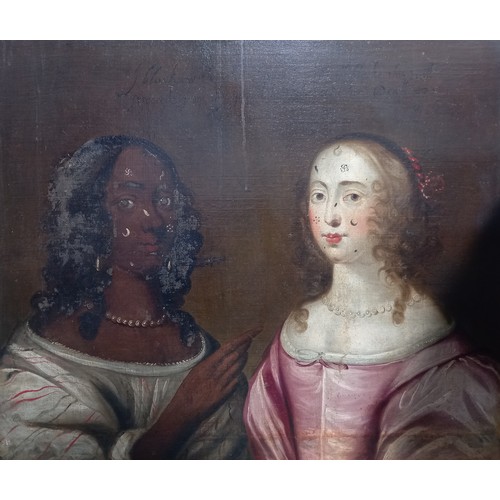 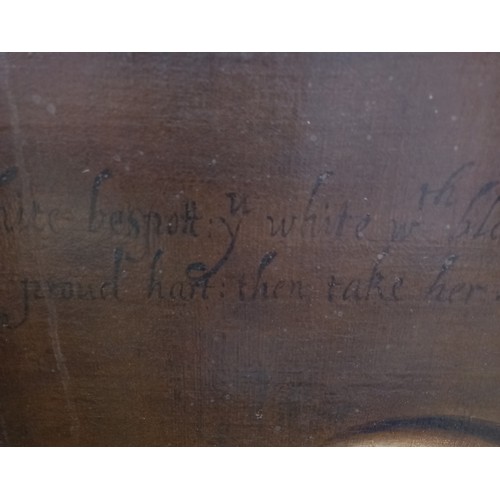 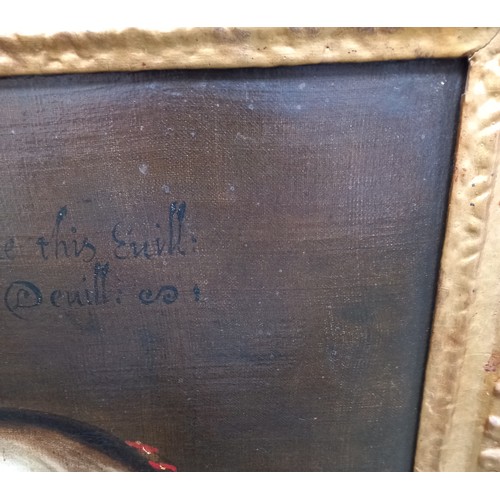 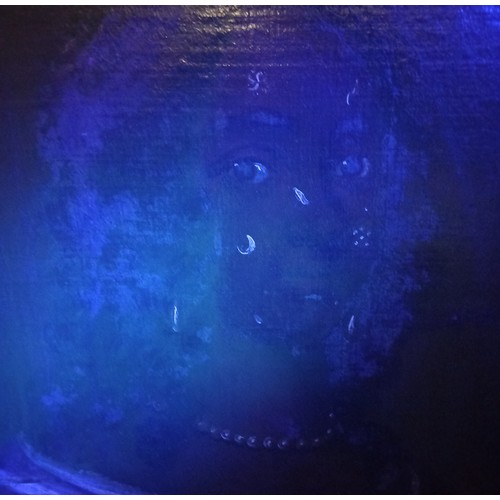 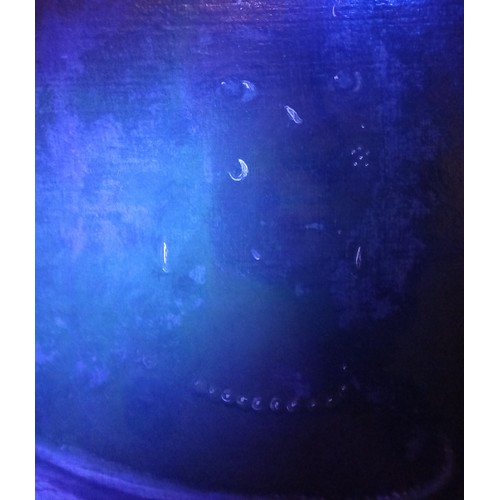 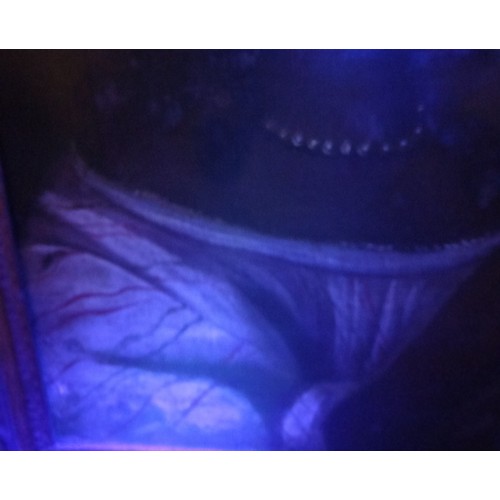 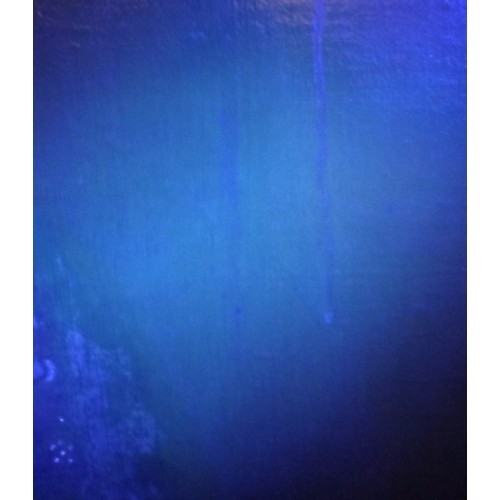 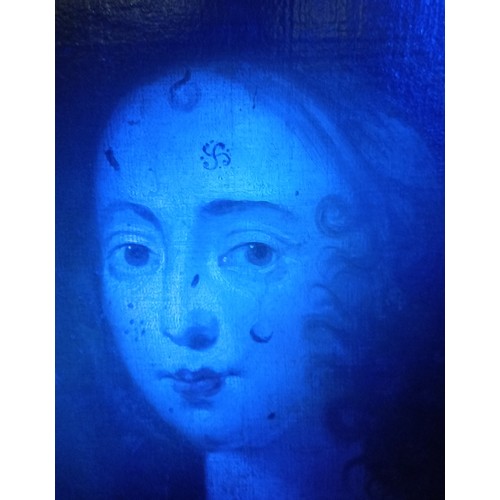 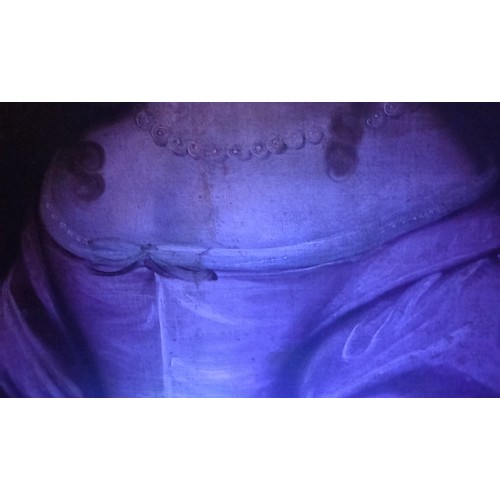 English school, circa 1650,
Portrait of two ladies, both half length,
Patch marks to their faces inscribed 'I black with white bespott y white with blacke this evil proceeds from thy proud hart then take her: Devill',
Oil on canvas,
64cm x 75cm,
Gilt framed

- Please note that if you are successful with purchasing this lot we will be asking you for two forms of identification to prove your name and registered address to comply with anti-money laundering regulations.

- Should an export license be required, we suggest you contact Richard Tomkinson at Cadogan Tate. We do not deal with export licenses in-house.

- Payment will be required strictly within 7 days of the date of the auction by bank transfer only. If you cannot adhere to these payment terms, please do not bid.

- As you will expect, we have had an overwhelming amount of interest in this lot and we appreciate your patience.

- To avoid an embarrassing conversation after the auction, please do not ask us NOT publicise this lot, we will be publicising it via our usual channels.


This painting provides the viewer with a fascinating insight into politics, gender hierarchy and society in 17th century England. The style of the sitters' dress, hair and jewellery would appear to date this painting to the 1650’s during the Interregnum when low cut, off-the-shoulder bodices were the height of fashion and the hair was worn in loose waves to the shoulders on the sides, with the remaining hair gathered at the back of the head. The addition of pearl necklaces and earrings was typical of this period.
The depiction of face patches in this painting is quite extraordinary, face patches have been used since ancient times for purely practical purposes to cover up scars and blemishes. However, in the mid 17th century some men were outraged by the way women dressed and wore make up. In 1650 parliament debated whether to pass an act against ‘The vice of painting and wearing black patches, and immodest dress of women’, the bill did not make it to law but had some popular support. The Puritan obsession with sexual promiscuity was also reflected in a crackdown of all forms of ‘nightwalking’ aimed at removing prostitutes from the streets. The implication was that a ‘patched woman’ had something to hide, which may have been as innocent as a birthmark or small-pox scar, but she could also be hiding something much more sinister, perhaps a syphilis scar or other sexually transmitted diseases. The association of patches with sexual immorality, deceit and aristocratic affectation was everything Cromwell and his Puritan government sought to outlaw.
http://eighteenthcenturylit.pbworks.com/ provides an interesting insight: ‘A patch is defined by the Oxford English Dictionary as “A small piece of black material, typically silk or velvet, cut into a decorative shape and worn on the face, either for adornment or to conceal a blemish”. The art of patching one’s face became popular in the seventeenth century, and continued to be fashionable until late in the eighteenth century. Among women, wearing patches on the face was a part of a larger cosmetic fashion movement characterised by a desire to emulate youth by achieving the “perfect” complexion. The art of patching is said, apocryphally, to aim to emulate the beauty spot of Venus, whose one dark imperfection highlighted the flawlessness of her complexion and thus made her beauty complete (Downing 22 and Fairholt 1:303). Patching was also popular among men, particularly for the “dandy” meaning that the patch was a part of both male and female attire. The response of the seventeenth century Puritans in England to the practice of any use of cosmetics was not favourable; a response which could not fail to include the art of patching. A sermon written by divinity student Andrew Jones titled “Morbius Satanicus, The Devil’s Disease, or The Sin of Pride Condemned and Arraigned” uses Ezekiel 16:49, in which Jerusalem is related to the ancient city of Sodom, to draw a parallel between the unfaithful Israelites of the time of Ezekiel, and the unfaithful state of England at the time. The key to this unfaithfulness, he suggests, is the abundance of pride, which partly manifests itself in the painting and patching of the face. In 1683, another Puritan text, “England’s Vanity, or the Sin of Pride” is printed, a text which again damns the abundance of Pride in England. The author, talking specifically of patches, calls them “the very tokens of death”.
While “England’s Vanity” begins as an address to all mankind, it quickly begins to concern itself solely with women, comparing painted and patched women to Jezebel, the infamous whore of Babylon. This speaks of a societal misogyny that fears the ability of women to change their appearance. Perhaps it was because patching and wearing cosmetics gave women the power to present themselves as they wanted, that the Puritans were so critical of the practices. Perhaps it was that the Puritans really believed that if women could improve their appearance, men would not be able to resist themselves from being tempted by them and would fall into sin. In either case, the texts show that the male authors were particularly indignant to the art of patching on women.

Patching, then, posed a problem for the Puritans. The idea of changing one’s appearance opposed their theology that God has made everyone as they should be, and therefore that to alter one’s appearance was to tamper with God’s creation. This was blasphemous, as tampering with God’s creation was seen to be, in effect, “playing God”. It would also pose a threat to the patriarchal power structures in the religion if it were true that made up women gained some power over men through the act of hiding something from them. The inflammatory indignation with which the Puritans of the late 17th century responded to the fashion of patching and painting seen in these texts is indicative of their fear of it. There was an attempt to make all cosmetic use illegal as early as June 1650, when parliament ordered “an Act against the Vice of Painting and wearing black Patches and the immodest Dresses of women” to be read. The act did not get far as there is no further record of it in Journals of the House of Commons (Downing 21). Even had the Act passed, it is unlikely that the efforts of the Puritans to halt the art of patching and painting would have got very far; indeed even such damning arguments as have been seen here do little to halt the rise of patching as an everyday fashion.’

The depiction of a black woman sat alongside, and not subservient to, her companion, at this date is also an important factor to note, where both sitters are depicted as ‘social equals’ denoted by the style of the dress and jewellery.

It would appear that the painting here is a moralistic warning to the viewer, set to highlight the mortal dangers of vanity and pride in 17th century Puritan England. Of course, patches came back in to fashion in England under King Charles II who grew up in France and brought the fashionable phenomenon of ‘patching’ back to England with him where it flourished.

The picture shows evidence of historic re-lining, re-stretching and re-framing. There are three small points of damage at the left hand edge approximately 5mm in from the frame, with a further small area of damage in the bottom left hand corner. There is a line of slightly raised discolouration running horizontally across the bottom of the picture, approximately 5cm above the bottom edge of the frame in line with the lower stretcher. The edge of the picture below this horizontal line shows some general discolouration, most noticeably in both corners. This may be a possible indication that the painting has been folded at some time to reduce the height, or possibly evidence of historic restoration or repair, as below this line there appears to be a significant change in appearance. The stretchers appear to be pine and later than the painted surface, probably early 19th century, as does the frame. The visible back of the canvas also appears to be 19th century. The paint surface shows evidence of later varnishing, but there are extensive losses to the paint and varnish to the black hair and other black pigmented areas of the left hand figure. Parallel to the left hand figure’s hair and earring on the right of her face is an obscure black horizontal line which may be an old repair. There are drip marks on the painted surface running vertically down from the frame in the top left corner and in the centre of the picture. The right half of the picture shows areas of small surface marks, predominantly in the top half. There is a small line of paint loss running vertically down the décolletage of the right hand figure. We strongly recommend inspecting this picture in person if you are intending to bid to ensure you are wholly satisfied with its condition. This condition report is based on visual inspection only. Condition reports are provided free of charge as a convenience to our buyers and are for guidance only. They offer our opinion but they may not refer to all faults, inherent defects, restoration, alteration or adaptation because our staff are not professional restorers or conservators. For that reason they are not an alternative to examining a lot in person or taking your own professional advice. We recommend you get your own advice from a restorer or other professional adviser if you intend to bid on this lot. 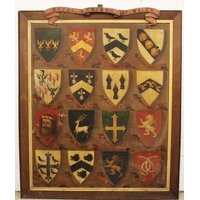 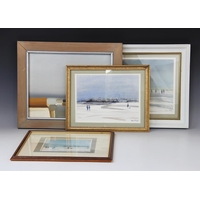