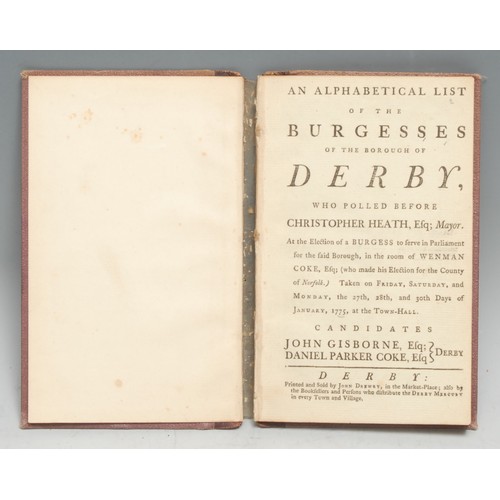 Local Interest, Georgian Politics, 1775 Poll Book - Provincial Imprint, An Alphabetical List of the Burgesses of the Borough of Derby, Who Polled before Christopher Heath, Esq; Mayor/At the Election of a Burgess to serve in Parliament for the said Borough, in the room of Wenman Coke, Esq; (who made his Election for the County of Norfolk.) Taken on Friday, Saturday, and Monday, the 27th, 28th, and 30th Days of January, 1775, at the Town-Hall/Candidates John Gisborne, Esq; Daniel Parker Coke, Esq, Derby: Printed and Sold by John Drewry [...], [n.d., 1775], pp: [2], 3-24, decorative header and footer, 19th century roan over cloth (amateur-repaired back, split at title), red-speckled edges, 8vo, [1]

Gisborne exercised political influence in Derby which he appears to have used on behalf of the Cavendish family for many years. He stood for Derby at a by-election on 30 January 1775 probably supported by the Duke of Devonshire. He was returned as Member of Parliament, but petitions were submitted complaining that he exercised undue influence over the mayor. As a result of these, he was unseated on 8 February 1776 and Daniel Parker Coke took his place as MP. 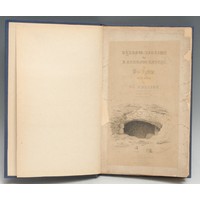 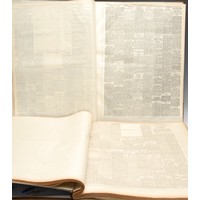