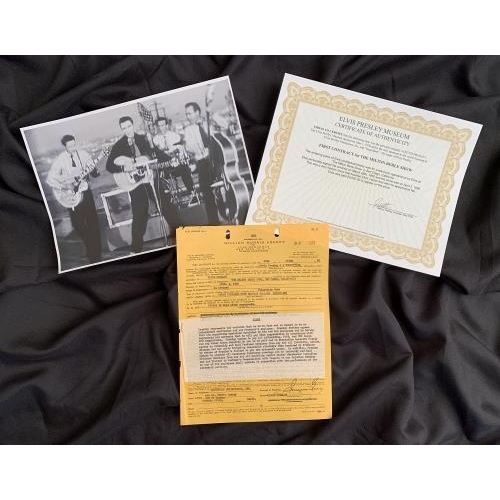 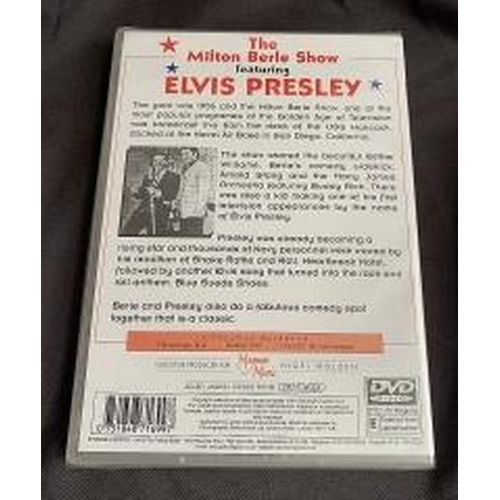 Showbusiness/Rock and Roll/Music/Icons.
ELVIS PRESLEY'S FAMOUS 1956 FIRST MILTON BERLE TELEVISION SHOW SIGNED CONTRACT FOR HIS HISTORIC TELEVISION GUEST APPEARANCE.
This iconic lot is accompanied by an Elvis Presley Museum certificate of authenticity hand signed by Jimmy Velvet who was Elvis' friend of twenty two years and the Founder and original President and CEO of the world famous Elvis Presley Museum all those years ago.
ELVIS PRESLEY MUSEUM CERTIFICATE OF AUTHENTICITY THIS IS TO CERTIFY that the following item was the personal property of ELVIS PRESLEY. The Elvis Presley Museum opened on June 1st, 1978. and is the only museum in the world licensed by Elvis Presley Enterprises Inc and "Graceland" -the estate of Elvis Presley
"FIRST CONTRACT for THE MILTON BERLE SHOW
This amazing piece of Elvis contractual history was for a television appearance by Elvis on 'The Milton Berle Show' in San Diego California. Elvis personally signed the contract on March 28th, 1956 and the show was on April 3, 1956. This was very a historic show that boosted Elvis career and also his appearance fee. Elvis was paid $3,500.00 to appear on the show"
(Hand signed in ink) Jimmy Velvet, Founder and CEO
Shake Rattle and Roll, Heartbreak Hotel and Blue Suede Shoes, songs from Elvis Presley's Live TV performance on the Milton Berle Television Show, San Diego, California on Board the USS Hancock April 3rd 1956.
This extremely rare, famous and historical William Morris Agency contract was hand signed by Elvis Presley and Elvis' employer on the 28th March 1956, Elvis was paid $3500. Elvis was an independent contractor and not the producers employee. Scotty Moore, Bill Black and DJ Fontana were Elvis' employees, Elvis was responsible for them. Elvis would pay his three musicians out of his fee and be responsible for all insurance coverage and liability's. The year was 1956 and the Milton Berle Show, one of the most popular programmes of the golden age of television was broadcast live from the deck of the USS Hancock, docked at the naval air base in San Diego, California. The show starred the beautiful Ester Williams, Berle's comedy sidekick, Arnold Stang and the Harry James orchestra featuring Buddy Rich. There was also a kid making one of his first television appearances by the name of Elvis Presley. Presley was already becoming a rising star and thousands of navy personnel were wowed by his rendition of Shake Rattle and Roll, Heartbreak Hotel, followed by another Elvis song that turned into the rock and roll anthem, Blue Suede Shoes, also included is a DVD ot the Television show. 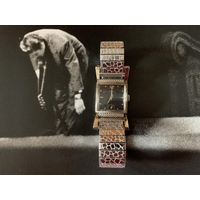 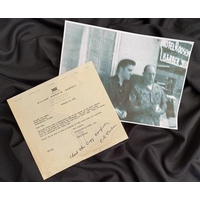