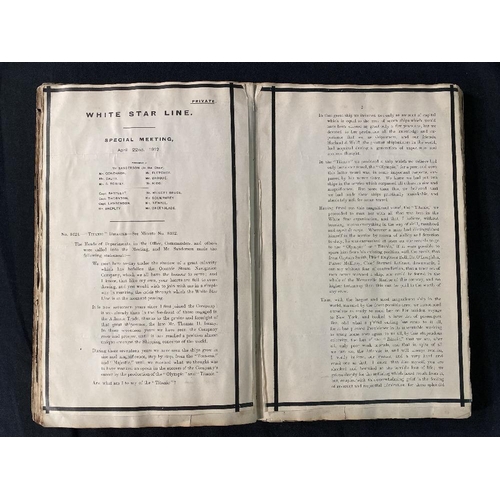 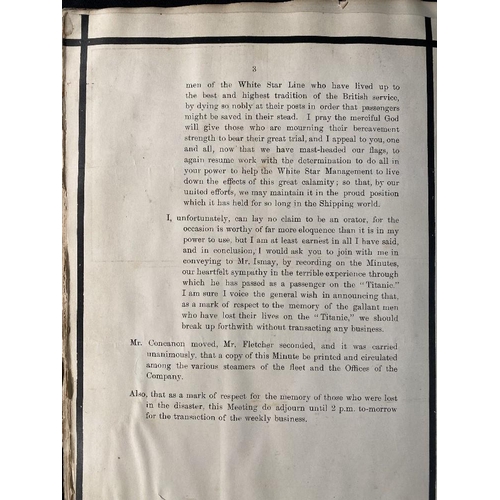 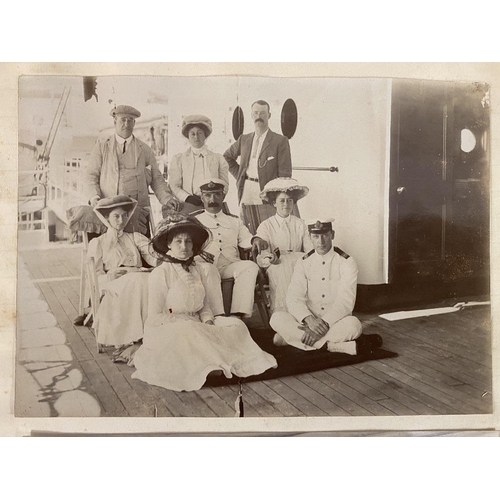 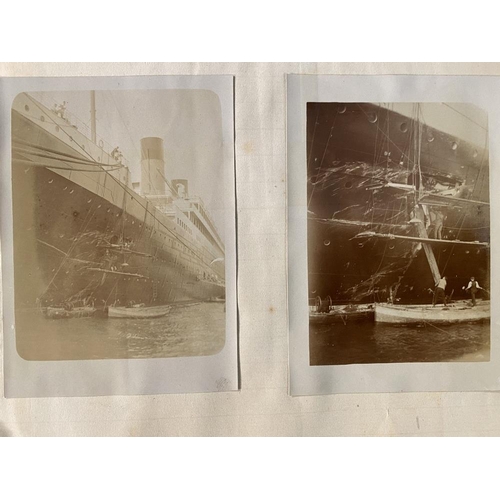 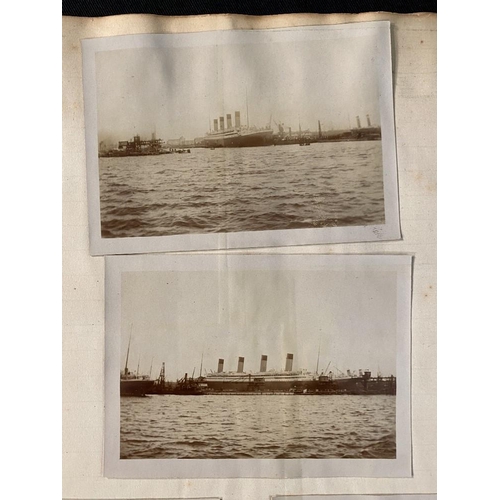 R.M.S. TITANIC/WHITE STAR LINE TITANIC BOARD MEETING MINUTES: An extremely important archive personally assembled by White Star Line Captain Charles Edwin Stark. Captain Stark's log indicates that he served with the White Star Line from 1894 to 1918 (he apparently died in 1919).
Commencing as Third Officer on board Ionic undertaking three voyages, he progressed to Second Officer and finally to Commander on board, among others, SS Armenian May, 1906 and SS Suevic February 1909 to April 1913. As a senior Officer he received the aforementioned notes titled 'Special Meeting April 22nd 1912 (7 days after the Titanic's Loss) attended by all the senior Directors. The extremely rare minutes are printed over three pages with black mourning border. They give an unprecedented snapshot into the private meeting of the White Star Line's senior board members in the direct aftermath of the disaster. It reads briefly in part: Having fitted out this magnificent vessel, the Titanic, we proceeded to man her with all that was best in the White Star organisation, and that, I believe, without boasting, means everything in the way of skill, manhood and esprit de corps. Wherever a man had distinguished himself in the service by reason of ability and devotion to duty, he was earmarked at once on our records to go to the Olympic or Titanic if it were possible to spare him from his existing position, with the result, that from Captain Smith, Chief Engineer Bell, Dr. O'Loughlin, Purser McElroy, Chief Steward Latimer, downwards, I can say without fear of contradiction, that a finer set of men never manned a ship. Thus, with the largest and most magnificent ship in the world, manned by the finest possible crew, we announced ourselves as ready to send her on her maiden voyage to New York, and booked a large list of passengers. But, oh! what a pitiful ending has come to it all, but coupled with this overwhelming grief is the feeling of reverent and respectful admiration for those splendid men of the White Star Line who have lived up to the best and highest tradition of the British service, by dying so nobly at their posts in order that passengers might be saved in their stead. I appeal to you, one and all, now that we have mast-headed our flags, to again resume work with the determination to do all in your power to help the White Star Management to live down the effects of this great calamity. I would ask you to join with me in conveying to Mr. Ismay, by recording the Minutes, our heartfelt sympathy in the terrible experience through which he has passed as a passenger on the Titanic. I am sure I voice the general wish in announcing that, as a mark of respect to the memory of the gallant men who have lost their lives on the Titanic, we should break up forthwith without transacting any business.
The album itself contains numerous press cuttings relating to Captain Stark, original photos including unpublished images of the Olympic shortly after the HMS Hawke incident, letters and other private information. Also included are several Titanic and other related postcards. A unique archive. 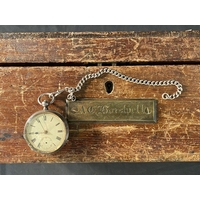 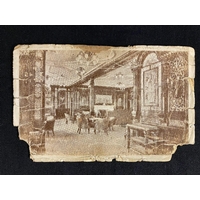