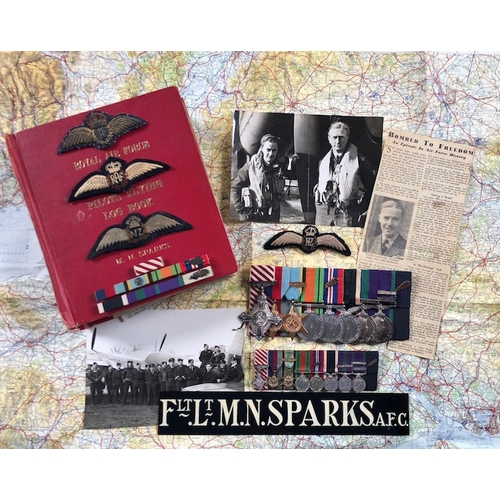 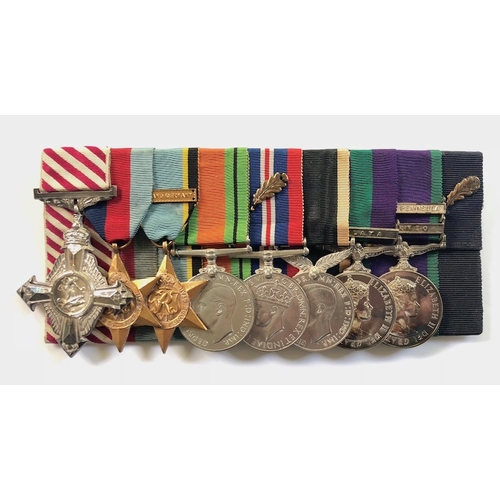 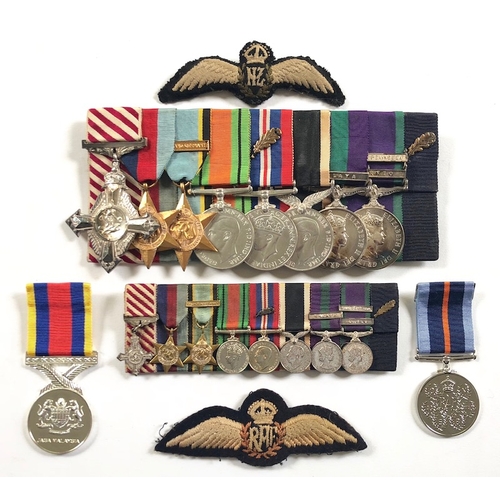 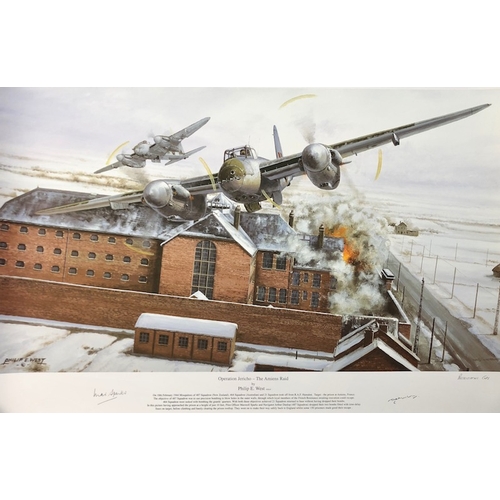 WW2 RAF Historic Operation Jericho Amiens Gestapo Jail Break Raid Medal Group of Flight Lieutenant M.N. Sparks AFC. .
The medal group and archive of Flight Lieutenant Maxwell Nicholas Sparks AFC, Queen's Commendation for Valuable Service in the Air, who as a New Zealand Mosquito pilot flew as number 3 in the first wave of the daring low level Amiens Prison Raid in 1944, remaining with the RAF he became a senior Helicopter Pilot in the Far East and was awarded the AFC for this work in 1960. Comprising: Medal Group: Air Force Cross (1961 Engraved M.N. Sparks), 1939/45 Star, Aircrew Europe Star, France & Germany clasp, Defence Medal, War Medal, MID Oak Leaf, New Zealand War Service Medal, General Service Medal, clasp Malaya (FLT LT M.N. SPARKS RAF), Campaign Service Medal, two clasps Borneo, Malay Peninsula (FLT LT M.N. SPARKS RAF), Blue Ribbon with Oak Leaf. The group remains originally mounted court style as worn. Medals have been plated/lacquered..... Accompanied by: Mention in Despatch Certificate 1st January 1945. .... Commendation for Valuable Service in the Air certificate 12th June 1945. .... Pilots logbooks. A number of logs have been privately bound into one volume this covers the period August 1941 to June 1963 and a separate log continues to April 1967. On the 18th June 1944 the log records Operation 25. Low level daylight opn. Attack on Gestapo prison at Amiens. Walls breached later gen proves opn 100% success A/C A write off (No.3 in First Wave). The log records 45 missions with 487 (NZ) Sqd. ... A selection of personal photographs and official documents recording his service career. ... Selection of RNZAF and RAF pilot wings, including by repute the pair he wore on the Amiens Prison Raid. ..... Selection of flying maps..... etc. . . . .Flight Lieutenant Maxwell Nicholas Sparks AFC was born in New Zealand in 1920. He volunteered for service with the RNZAF in July 1941 and began Flying training in August 1941. Posted to Canada for training he landed in the UK in March 1942 and served at 17 OTU before being posted to 487 (NZ) Squadron operating the Ventura 1 light bomber flying for the first time with the Squadron on the 12th October 1942. On the 19th February 1943 he flew his first operation described as a Circus Dunkirk, with 10/10 cloud over the target the op was abandoned. The following month would see operations over Rotterdam. Having 11 trips under his belt with the Ventura, the Squadron was rested and converted to the De Havilland Mosquito twin engined bomber. On the 3rd August he flew his first trip with the new type a low level raid on Pont Chateau Power Station the log records A/C hit by bomb blast. On the 18th February 1944, along with his regular navigator P/O Dunlop he was briefed for a daring low level bombing operation on the Amiens Prison, this would become known as operation Jericho very a low altitude attack, on Amiens Prison in German-occupied France to blow holes in the prison walls, kill German guards and use shock waves to spring open cell doors. The French Resistance was waiting on the outside to rescue prisoners who got out and spirit them away. Some 258 escaped, including 79 Resistance and political prisoners. Sparks was detailed to fly number 3 in the first wave, his Squadron tasked with the destruction of the guards quarters. The target was reached Sparks and his navigator approached at only 10 feet from the ground, bombs gone, a steep powered climb and his aircraft only just cleared the roof of the prison. This dramatic moment was captured by the aviation artist Philip West titled Mosquito Attack, one of Flt Lt Sparks personal presentation editions of the print is included in the lot. Despite the success of the raid and celebrations it was back to ops two days later with a night intruder operation. On the 6th June 1944 he flew in support of the Allied Landings D-Day and with 45 trips noted in his log book he was screened from operations and posted in late June to RAF Defford. He remained a flying instructor until in January 1945 he returned to New Zealand. In 1947 he volunteered his service to the RAF and returned to the UK. First serving with 202 Squadron and later flew with 19 Squadron which flew the twin engined Hornet. He later converted to flying helicopters qualifying on the Sycamore, Skeeter, Whirlwind, Belvedere, etc. He saw extensive service in the Far East and was rewarded with the Air Force Cross in 1960. He returned to the UK and resigned his commission in 1967. He remained in the UK and died in 2013 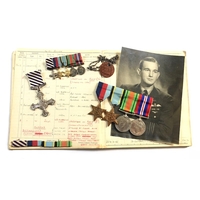 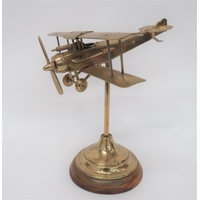