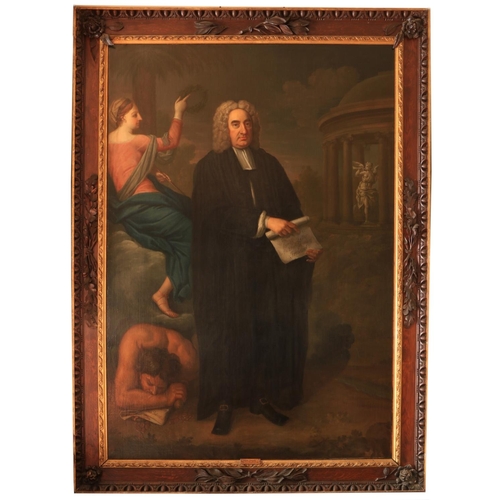 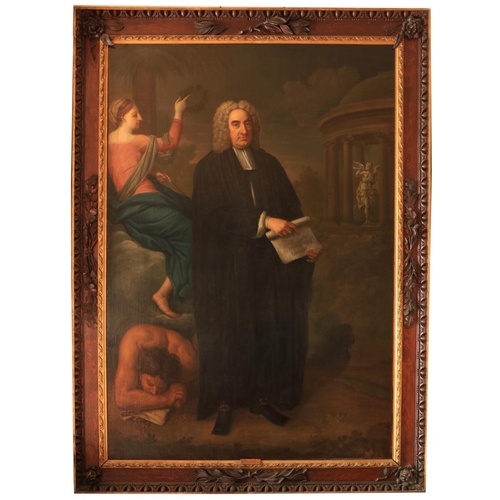 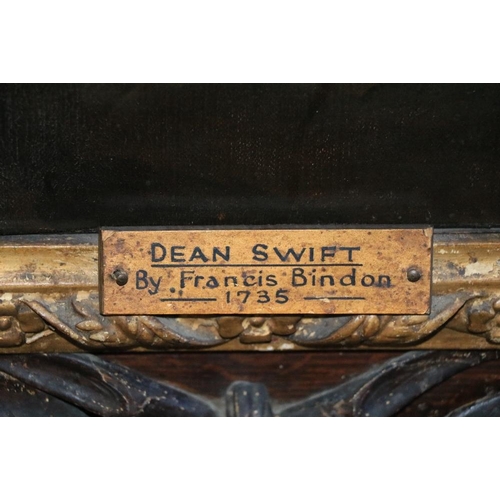 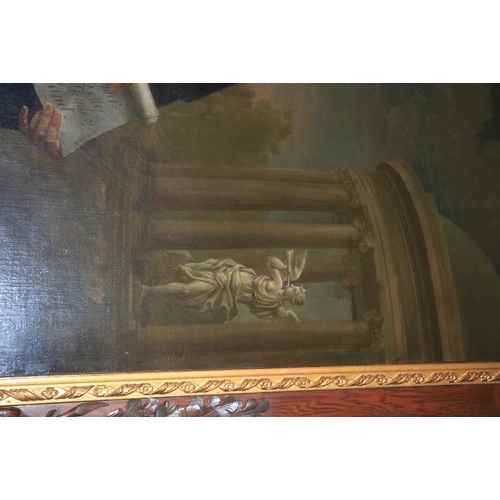 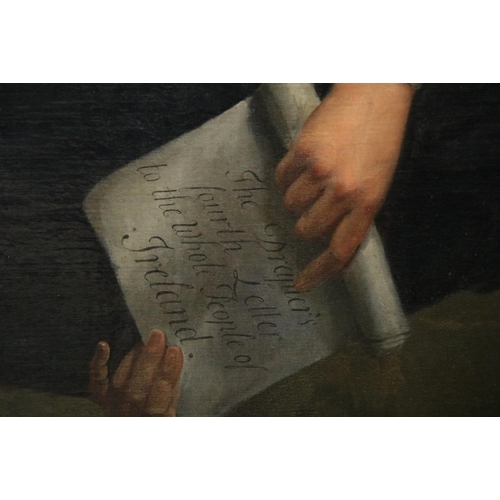 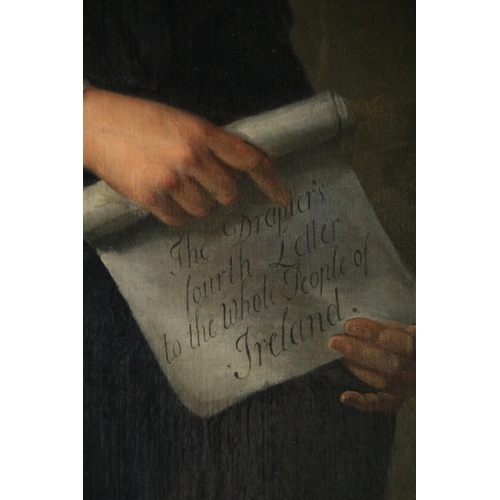 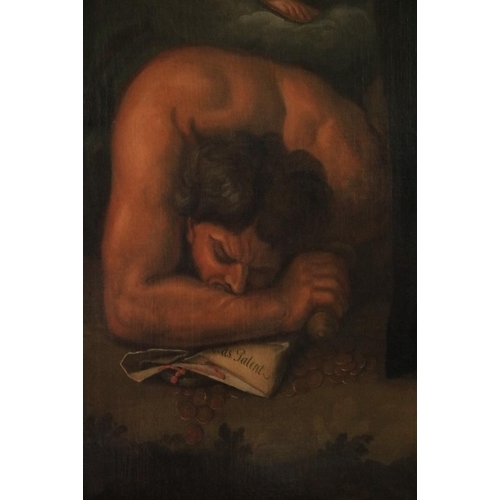 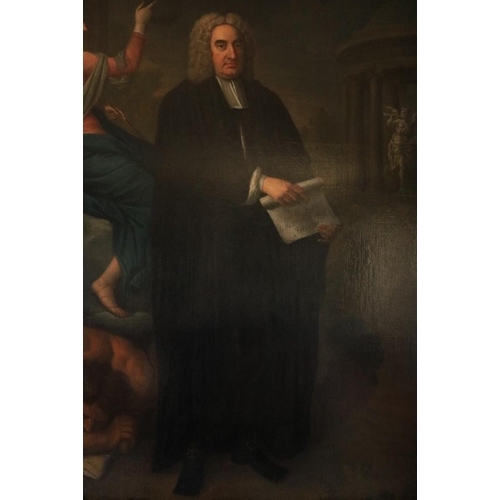 Notes:
In his History of Howth and its Owners, published by the Royal Society of Antiquaries in Ireland in 1917, Francis Ball describes the artworks in Howth Castle, focusing on the most important canvas: “ On the walls there hung a whole-length portrait of Swift by Francis Bindon, unique amongst portraits of him, in that its history is determined with absolute certainty. .”  This same painting is mentioned by Jonathan Swift in a letter he wrote to his friend Sheridan on 16th June 1735: ‘I have been fool enough to sit for my picture at full-length by Mr. Bindon, for my Lord Howth’ He had sat that day for two and a half hours.

Standing full-length, wearing wig and clerical robes, Dean Swift is depicted holding a scroll on which is written “The Drapier’s fourth Letter to the Whole People of Ireland.” Alongside him, grovelling on the ground, is a caricature of William Wood, clutching his ‘patent’. In 1722, the British government had granted the Duchess of Kendal a licence to issue copper coinage for Ireland. A mistress of George I, Kendal quickly sold the patent to William Wood, for ten thousand pounds. In Dublin, alarm spread and a campaign was mounted to stop the issuing of ‘Wood’s Halfpence’, as it would devalue existing Irish currency. Using the pseudonym “Drapier”, Dean Swift wrote letters, pouring scorn on the proposal. He also wrote songs, ballads and poems ridiculing Woods. Faced with almost universal opposition, the proposal to issue the coinage was quietly withdrawn. However, in Ireland the campaign had united disparate mercantile and political interests, and so laid the foundations for Grattan’s parliament. In the fourth of Drapier’s letter, Swift waxed eloquent: “One great merit I am sure we have, which those of English birth can have no pretence to, that our ancestors reduced this kingdom to the obedience of England, for which we have been rewarded with a worse climate, the privilege of being governed by laws to which we do not consent, a ruined trade, a House of Peers without jurisdiction, almost an incapacity for all employments; and the dread of Wood's halfpence.” Although a reward was offered for the exposure of the author of the letters, Swift was not betrayed.

The campaign won Swift the admiration of families such as St. Lawrence and during the early 1830’s he became a frequent guest at Howth Castle. He was a great admirer of Lucy, the young wife of William St. Lawrence, referring to her as a ‘nymph’. Lucy wrote him several letters, prompting Swift to advise that she ought ‘to go to a writing-school and spelling-book’. In 1735, Lord Howth commissioned Francis Bindon to paint a portrait of the Dean. The result is a sympathetic portrayal, showing Swift at a time when several of his close friends, including the writers John Gay and John Arbuthnot, had died, while the great love of his life, Esther Johnson, or ‘Stella’, had passed away seven years before, leaving him increasingly disillusioned and facing a lonely old age. Bindon depicted the Dean being crowned with laurel by a muse, while in the background, in a classical tempietto, a winged figure of Victory blows a trumpet. In a letter written from Kilfane on July 6th, William St. Lawrence thanked Swift for agreeing to sit for Bindon, adding that he had asked Dr. Grattan to carry the portrait to his own house, in order that a copy might not be substituted for the original.

Born in County Clare, as a young man Francis Bindon had travelled extensively in Italy, and later studied with Godfrey Kneller in London. As a landowner and member of the Royal Dublin Society, he was independently wealthy and not obliged to produce flattering images of sitters. Apart from churchmen such as Dr Delany and Archbishop Cobbe, he is thought to have painted the blind harper Turlough O’Carolan in a portrait now in the National Gallery of Ireland. Bindon also studied architecture with Edward Lovett Pearce, and designed houses such as Bessborough, Woodstock and Castle Morres, in County Kilkenny.

Jonathan Swift is without doubt the most important Irish writer of the eighteenth century. Born in Hoey’s Court, Dublin, he attended Kilkenny College before going on to study at Trinity College Dublin, where he received his BA in 1686. When William of Orange became King, Swift moved to England, becoming secretary to the diplomat Sir William Temple. At Temple’s home, Moor Park, Farnham, Swift was also a tutor, and among his pupils was a young orphan, Esther Johnson, who he nicknamed ‘Stella’. After receiving his MA degree from Hertford College Oxford in 1692, Swift was ordained a priest in the Church of Ireland and when Temple died in 1699, Swift returned to Ireland, becoming chaplain to Lord Berkeley, a job that allowed him time to write and also to visit London, where he lobbied government on behalf of the Irish clergy. He became a key negotiator for the Tory party, and fell in love with another orphan, Esther Vanhomrigh, whom he nicknamed ‘Vanessa’, presumably to distinguish her from his other Esther. Infatuated with Swift, Vanessa followed him to Ireland in 1714, where seventeen years later their relationship ended with a confrontation involving Stella. Between these complicated love affairs Swift attempted to progress his career, but Queen Anne stymied his efforts. With the Whigs in power in England, he accepted the post of Dean of St Patrick’s Cathedral, which he regarded as a disappointment, and indeed a form of exile, having hoped for a bishopric in England. However, at St Patrick’s, Swift began to turn his writing skills in support of Irish causes and also began to write his best-known work, Gulliver’s Travels. Published in 1726, this was an instant success and established Swift as a writer of note. However, with the death of his beloved Stella two years later, followed by the passing of other close friends, Swift himself began a long descent into physical and mental illness. His friendship with the St. Lawrence family was a solace during these years, and a chair referred to as “Swift’s Chair’ was preserved at Howth Castle. In the panoramic view of Howth Castle, painted around 1740, the Dean also appears, sitting on a bench in the garden. He died in 1745.

The success of the Howth portrait led to Bindon receiving further commissions, some probably from the Dean himself. There are several versions in existence, including one in the NPG in London, and another in the Deanery of St Patrick’s Cathedral. There is also a version, bequeathed by Swift to his housekeeper, that is now in the Crawford Art Gallery, in Cork. However the Howth portrait is acknowledged as the earliest, finest and most original of these.
A version of this Portrait dated 1738 hangs in the Deanery at St. Patrick's Cathedral, Dublin, and has an elaborate frame known to be by John Houghton, which was paid for by Lord Howth.
Dr.AndrewCarpenter, 2021; Dr. Peter Murray 2021

Important Note:
In view of the cultural and historic importance of this lot , the vendors have granted an option to the Irish State to acquire same at a price equal to the hammer price realised at the auction date, should a private or trade buyer successfully bid for same. This option shall be valid for a period of three months from the auction date, and the Irish State ( as represented by the Department of Culture, Heritage and the Gaeltacht, in conjunction with the National Museum, National Gallery and National Library of Ireland and Office of Public Works) shall have the option to acquire and purchase this lot within this time frame, at the final hammer price achieved at the auction date, plus buyer's premiums.

This lot shall be retained within this jurisdiction, and collection and shipment of same shall only be permitted on the expiryand non-exercise of this option by the Irish State bodies. A binding purchase contract shall still exist in relation to any private or trade buyer who successfully bids for this lot on the sale date and the full purchase price plus buyer's premiums due, shall become payable immediately following the expiry of the above option period. 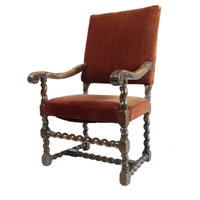 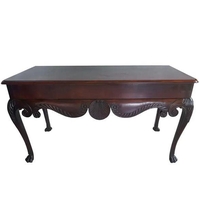