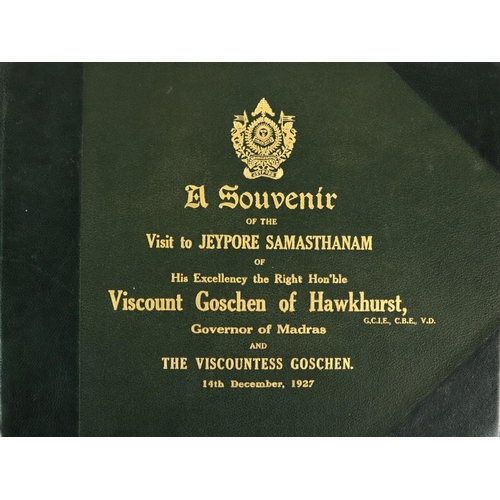 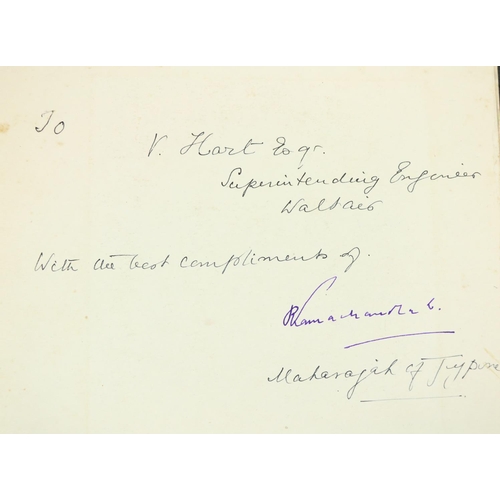 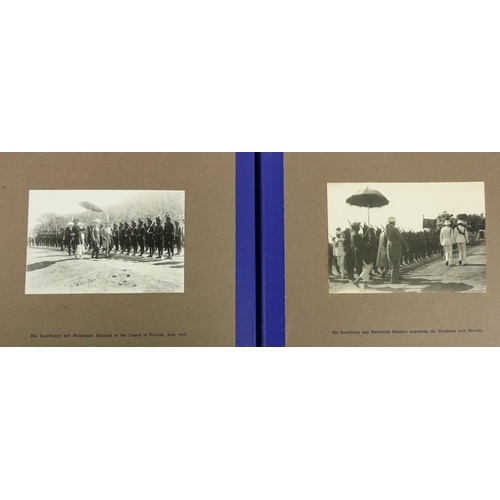 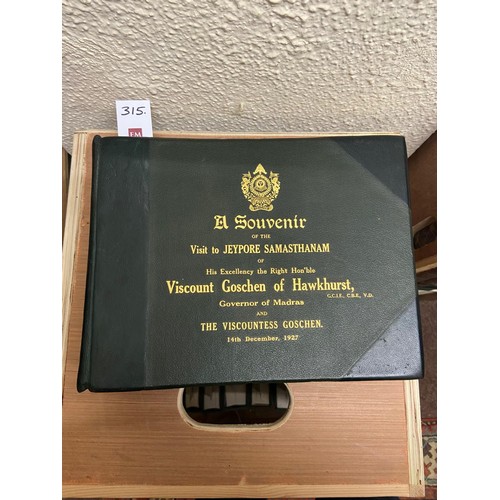 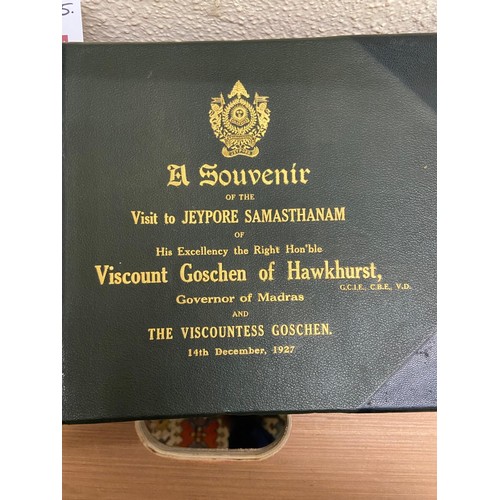 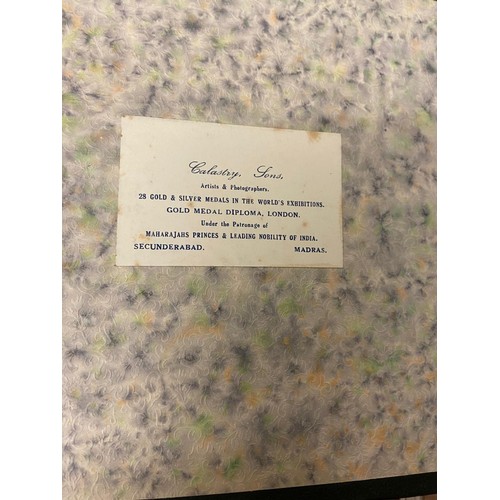 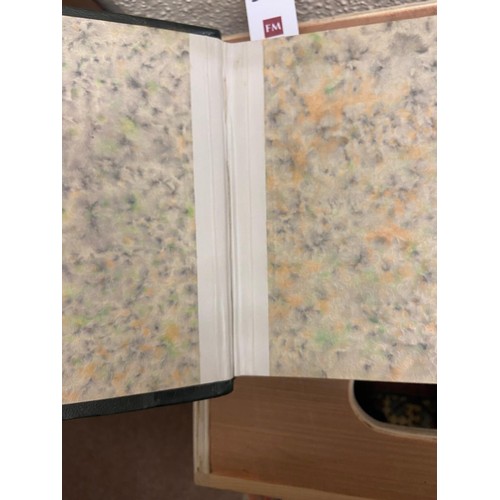 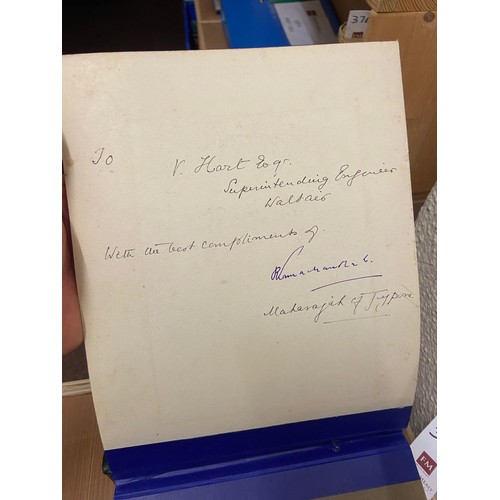 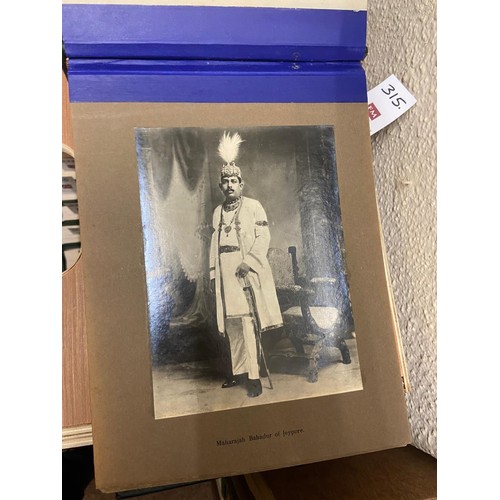 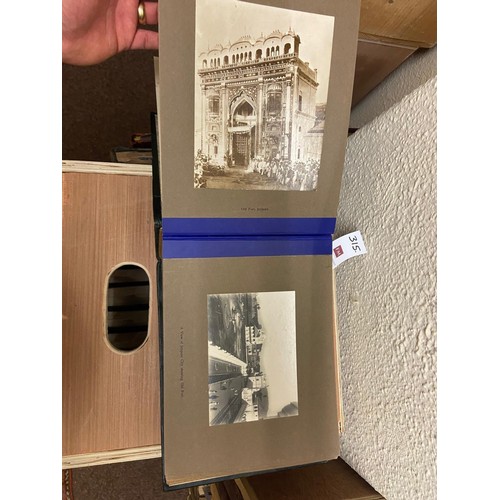 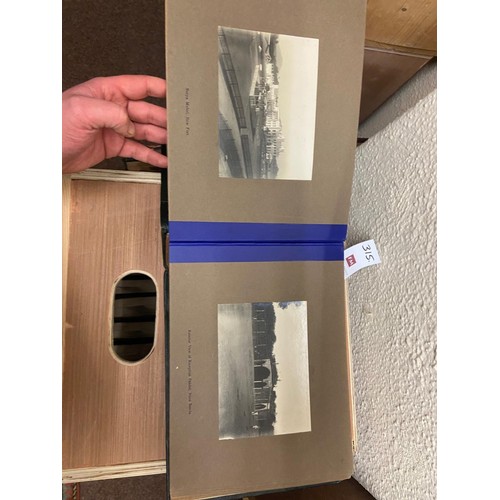 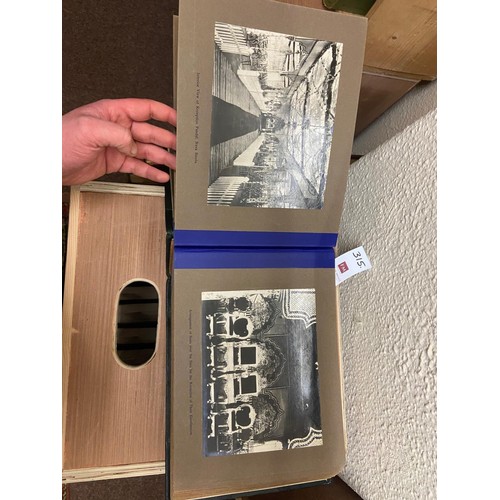 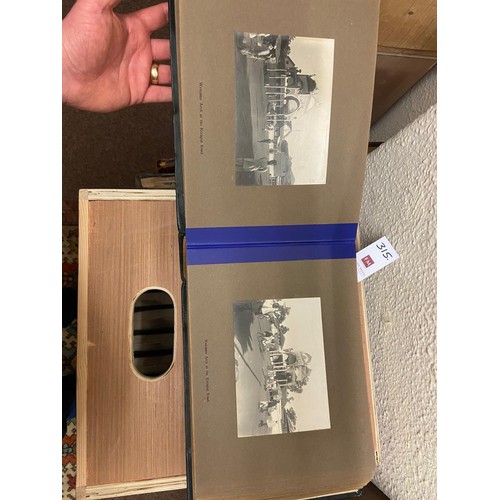 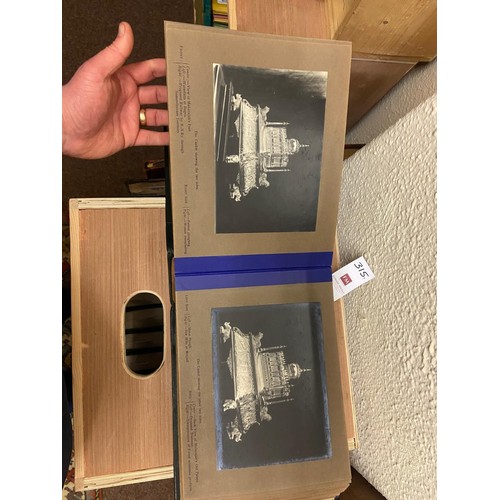 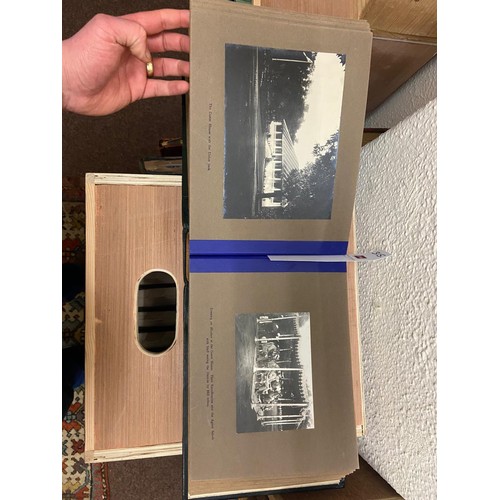 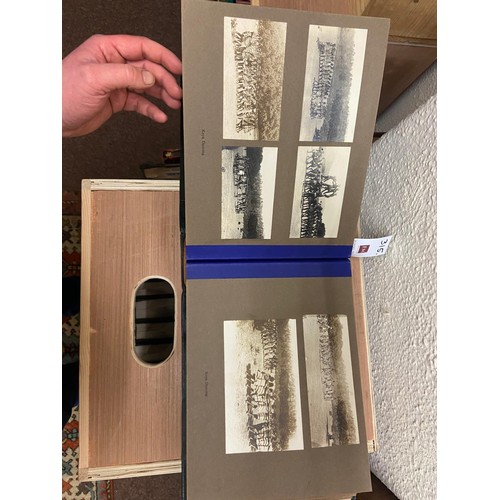 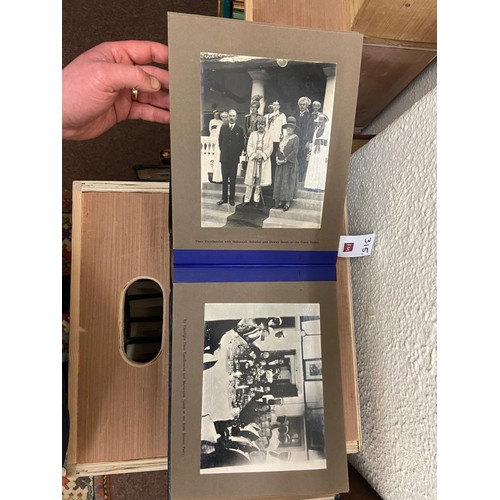 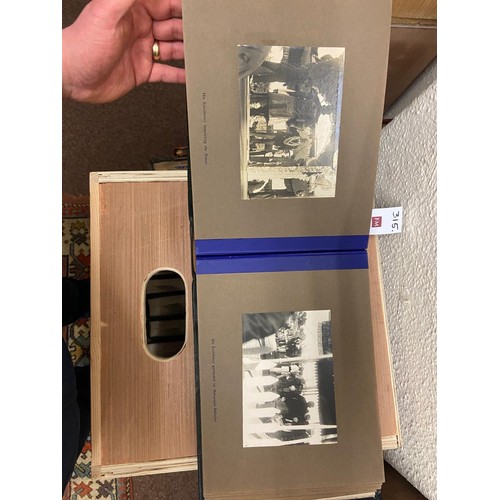 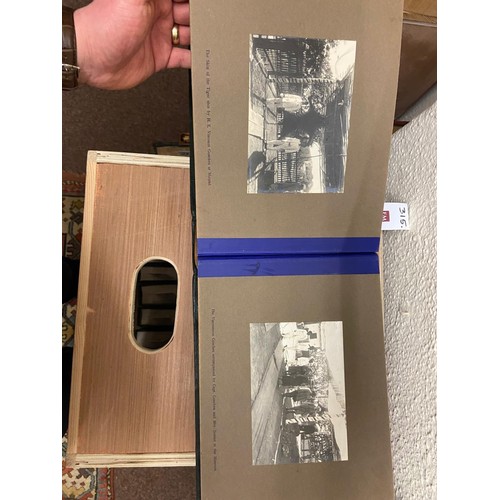 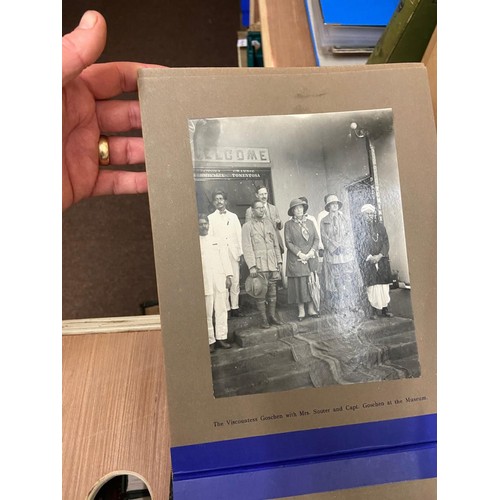 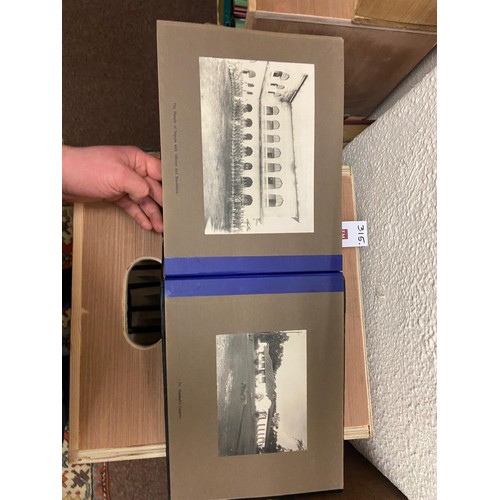 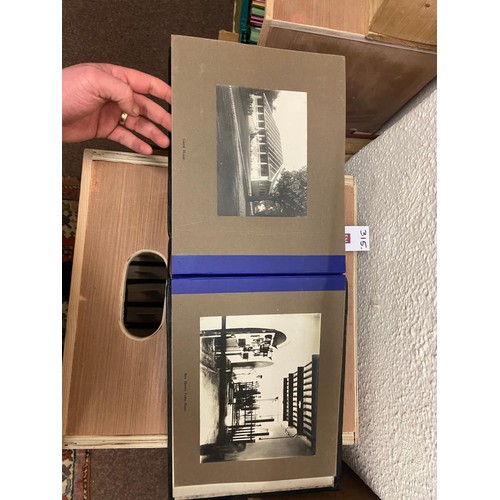 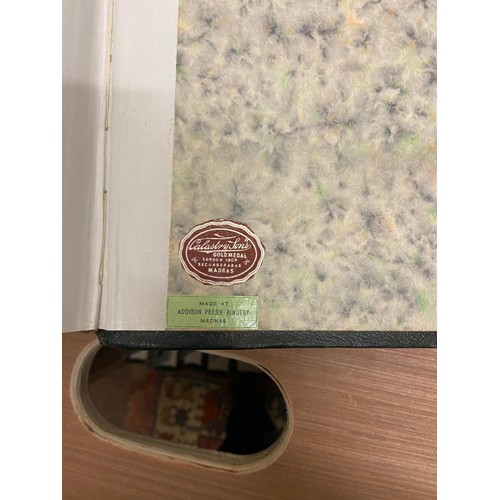 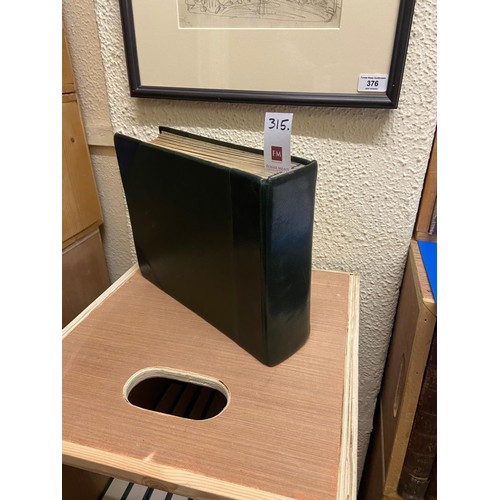 Photographs: [Calastry Sons, London & Madras] Photograph Album. Entitled ''A Souvenir of the Visit to Jeypore Samasthanam of His Excellency the Right Hon'ble Viscount Goschen of Hawkhurst, GCSI CBE VD, Governor of Madras, and The Viscountess Goschen, 14th December 1927'' With M/ss dedication ''To V. Hart Esq, Superintending Engineer, Madras. With the best compliments of Ramchandra, Maharajah of Jeypore.'' Oblong folio bound in green calf within brown paper wrappers, 23 x 31 cm. Gold tooled title. Marbled endpapers. 83 pp of photographs with printed captions. The photographs commemorate the visit in 1927 to the Zamindari (autonomous region) of Jeypore by the 2nd Viscount Goschen, Governor of Madras 1924-1929, and his wife, and their reception by the Maharajah Ramchandra Dev IV. Vincent Hart, to whom the album was presented, was born in Cork in 1881, trained at the Royal College of Engineering in London, and joined the Indian Public Works Department at Madras in 1903, becoming the Superintending Engineer in 1927. As Engineer-in-Chief he was responsible for the building of the Mettur Dam on the River Cauvery, at that time the biggest solid gravity dam in the world. In recognition of his work he was presented with the Companionship of the Star of India by King George V in 1935. He then retired to his house at Lotabeg on the Lower Glanmire Road, Cork, where he died in 1939. (1) 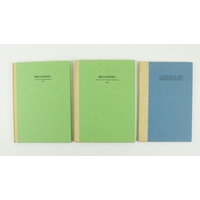 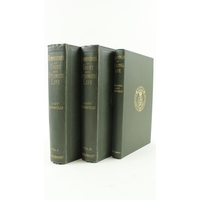