Remember the metal detectorist that found a 17th Century ring? Check out how much it went for at auction. 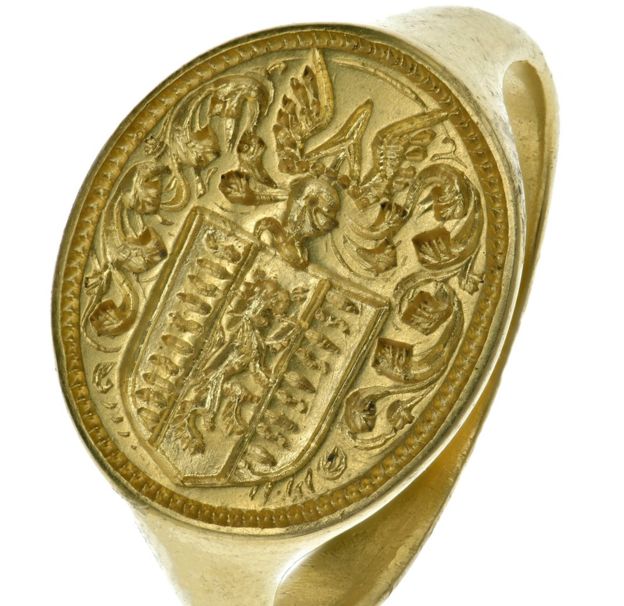 Enjoying the relaxation of their hobby, which she took up several years ago to help deal with panic attacks, Michelle and her husband were expecting to unearth nothing more than the usual worthless objects with their metal detector. Imagine their surprise and delight when they discovered something much rarer and more valuable just six inches beneath the soil.

The 17th century ring “shone with a distinct bright yellow colour as I carefully lifted it out of the dark muddy hole, where it had waited for at least 350 years," Michelle said.

Bearing the family crest, the ring is thought to be a family air loom which once belonged to Edward Colman who was a wealthy courtier to the future King Charles ll before being hung drawn and quartered in 1678 for alleged treason.

The Colman family made their fortune from the cloth trade in Suffolk in the mid 16th century. Edward Colman was implicated in the Popish Plot, a fictitious Catholic conspiracy which alleged that Jesuits were planning the assassination of Charles ll. Although the plot was later proven to be a lie, it was not before the execution of 35 innocent people, including Edward.

Adhering to the rules about treasure trove finds, Michelle declared the ring to the National Museum of Scotland which declined the option to purchase it. As no museum came forward to acquire the treasure, it was ‘finders keepers’.

She subsequently approached auctioneers Dix Noonan Webb which valued the ring at £10,000. Antique specialist at the auctioneer, Nigel Mills, said that “The Colman seal ring is an excellent example of a high-status ring of the period, of which there are only a very limited number surviving in this condition”.

The antique ring went under the hammer in London on Tuesday, when it exceeded its estimate and sold for £14,000 to a private collector from the U.S.

“I am extremely happy”, said Michelle, “to investigate something so precious and full of history has been the most amazing experience”.

She hopes her find is going somewhere where it can be displayed for others to see and learn of the history of Edward Colman and his tragic death.

Not being her first valuable find, Michelle is proof that metal detecting can be an extremely lucrative hobby. Back in 2017, a very rare ‘half angel’ coin she found sold at auction for a whopping £40,800. We look forward to seeing what her and her lucky metal detector unearth next!