Items from Queen Victoria’s Wardrobe to be Sold at Auction

Clothes once belonging to Queen Victoria will go under the hammer with an estimate of £15,000 next week. 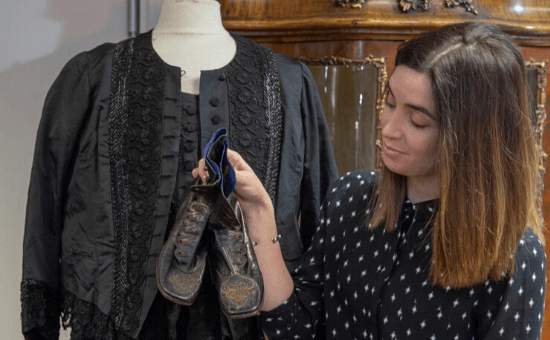 After being stored in a wardrobe for over a hundred years, a collection of items once belonging to Queen Victoria will go up for auction next week at Hansons, Derbyshire. Experts have estimated the lot will fetch in excess of £15,000.

The items include a bodice, skirt, pair of bloomers and leather boots – an outfit which was given to Alexander Lamont Henderson, the royal photographer, after Queen Victoria’s death in 1901. Having been passed from generation to generation, the items are now being sold by Roderick Williams, Henderson’s great-great grandson.

Roderick, 63, believes the garments were probably gifted to his great-great grandfather by servants in the royal household, possibly in exchange for him taking photographs of them. He stated that Alexander caught the attention of the then queen “thanks to his experimental colour work with glass plate lantern slides and enamels”.

Although the photographer created many portraits whilst working for the royals – including photos of Queen Victoria herself as well as of her husband, Prince Albert, and Scottish attendant, John Brown – much of his work has, unfortunately, been lost or destroyed.

Alexander died just a few years after Queen Victoria, in 1907, after which time the clothes remained stored in a wardrobe whilst being passed down through the generations. The entire lot consists of bloomers, a chemise, a black skirt, cream and red stockings and two pairs of leather ankle boots. The boots are handmade and crafted by the shoemaker known for the design of the Chelsea boot, J Sparks-Hall of London.

Charles Hanson, owner of the auctioneers where the items will be sold, has said:  “Famously, after the death of her beloved husband Prince Albert in 1861, she wore black for the rest of her life and the bodice and skirt we’re selling are black”, adding that, “her leather ankle boots show how dainty and narrow her feet were. They are around a size four and the design paved the way to the Chelsea boot. The makers, J Sparks-Hall of London, claimed she wore their boots daily”. The boots alone are expected to fetch between £1500 and £2000.

Owing to her love of food, Queen Victoria’s waistline expanded over course of her long reign. At the time of her death, her waist was 50 inches – much larger than the petite size she was when she became queen. This can be seen in the size of the bloomers up for sale.

This is not the first time that royal garments have gone up for auction. Back in December, an iconic midnight blue dress worn by Princess Diana to a gala hosted by US President Ronald Reagan fetched a staggering £264,000.