Temperatures may have dropped but Barometer prices are looking fair.


Once a common feature in most homes, barometers are no longer the staple they used to be. That doesn't mean that prices aren't good though. Fine antique examples can command red hot prices.

The sudden drop in temperature’s last week got us thinking about the weather in general. In this technology, rich era we take for granted things like knowing the weather. We can tune into all day news channels, showing us the weather, pick up our smartphones and glance at a widget on our screens or ask our digital assistants such as Alexa, Siri or Google. There was however a time, not so long ago when these option s were not available to us.

For millennials, and Generation Z these things are literally taken for granted, many may never have seen a barometer, let alone know what it is.

Invented back in 1643 by an Italian, Evangelista Torricelli, Barometers were comprised of a sealed glass tube and a bowl of mercury. Atmospheric pressure moved the mercury up and down the tube. High pressure indicates fair weather, while low pressure indicates rain clouds are on the way.

Over the years different methods have been used for barometers, the most common of which, in more modern times is the aneroid barometer. This was invented by Lucien Vidi in 1843. It removes the need to use toxic mercury. Instead, the barometer contains a little box made up of beryllium and copper, as air pressure changes the shape of the box changes, this is connected to a little needle via cogs, as the pressure changes the needle moves.

Another type of barometer is a sympiesometer barometer. This uses a traditional mercury thermometer alongside an almond oil 'J'-shaped tube to measure atmospheric pressure changes.

Barometers range in style and price, with some more modern examples going for between £30-£50, there are others however which command much heftier price tags.

Some 18th Century mercury stick barometers can fetch in the region of £1,000. Of course, this depends on the condition and maker of the instrument. Particularly fine examples such as a 1730 walnut long case made by John Halifax of Barnsley could far exceed this commanding sale prices of around £15,000!

When it comes to aneroid thermometers which were invented in the 19th Century, a good example by a manufacturer like Bourdon and Richard can achieve a price of around £3,000.

sympiesometer barometers can fetch around £500 in good condition.

There’s always a good range of barometers available at auction. You can take a look at the current selection here. While many are stick or banjo shaped, there are some more interesting variations such as this propeller barometer, which is guaranteed To Be Made From British aircraft propellers of the war period 1914-1918.

This beautiful Regency inlaid mahogany mercury wheel barometer signed G.Trombetta of Norwich has an estimate of £300 - £500. 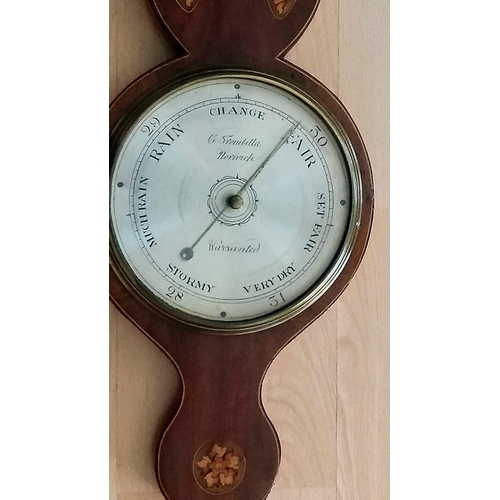 Designs changed with the times to fit in with people’s interior fashions. From Gothic to Art Deco, there was something to suit everyone. While barometers may seem pretty archaic they are in fact still really useful and can add some character to our homes. Take a look at our website and if you fancy keeping an eye out on future lots, remember to set an auction alert.