A watch owned and worn by The King, Elvis Presley during his early career on TV appearances is due to be auctioned with Henry Aldridge on Saturday. Find out more here... 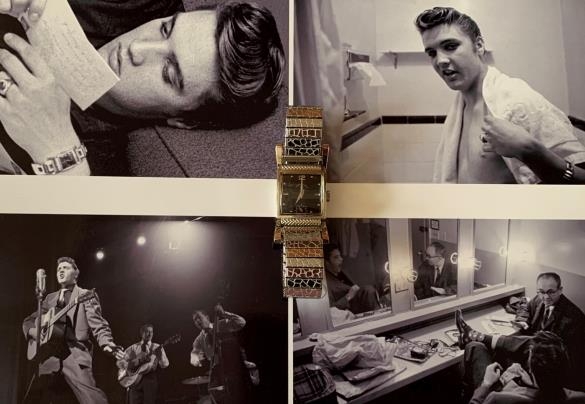 On April 25, 1956, Elvis Presley, Bill Black, Scotty Moore, And D.J. Fontana were sitting near the pool at the New Frontier Hotel in Las Vegas when a Jeweller approached Elvis with a jewelled watch as a gift for him. Elvis took off the watch he was wearing, saw that Scotty was not wearing a watch (he had broken the band on his) and gave his old watch to Scotty. Scotty kept the watch in his possession from then to the mid-90's at which time he had the watch cleaned and repaired and gave it as a Christmas gift to Ronnie McDowell. A picture of the group on that day shows the guys at the pool at the actual time that Elvis gave the watch to Scotty - (signed Scotty Moore)

Included with the watch are documents of authenticity, the first of which is hand-signed by Jimmy Velvet, founder and original President and CEO of the world-famous Elvis Presley Museum, which reads

This 14K gold-filled, Lord Elgin watch with black face was personally owned and worn by Elvis from Spring of 1955 - April 1956 and comes with a great bit of history. Elvis wore this watch on stage for his first National Television appearance; The Dorsey Brothers (Jimmy & Tommy) 'Stage Show' in New York, on January 28, 1956, making his historic mark in the entertainment industry. The show was recorded and broadcast from CBS TV Studio 50 at 1697 Broadway in New York City, NY. Elvis wore this watch on many more Dorsey Brothers show appearances, and not just there. He wore it while appearing on 'The Milton Berle Show', 'The Louisiana Hayride' and the list goes on. There are hundreds of great photos taken of Elvis wearing this watch. Here's a little backstory about the watch."

"Elvis gave this watch to Scotty Moore while sitting poolside at the New Frontier Hotel in Las Vegas on April 25, 1956. Where Elvis, Scotty (Guitar), Bill Black (Bull Bass) and D.J. Fontana (Drums) were appearing. In the mid-1990s, Scotty gave the watch to his good friend Ronnie McDowell. Ronnie and Scotty were good friends and worked together for 20+ years. While visiting with Ronnie a few weeks ago over a favourite local breakfast spot, I had the watch with me. He was certainly surprised, and the reminiscing started. We had a great visit as always and took a couple more photos of the watch to add to the fabulous photo library of where this watch has been for the past 42 years amongst the world of Elvis of those who knew him, loved him and miss him."

The watch is accompanied by several photographs of The King wearing the watch, a letter of authenticity signed by Scotty Moore and DJ Fontana and notarised by Notary Public Patricia A. Keen.

Henry Aldridge & Son are offering a momentous opportunity to get your hands (or should we say wrist!) on an incredible piece of musical history. Check out the lot here.