A huge collection of pop memorabilia which was collected by David Gest is due to go under the hammer next month with Cato Crane. With numerous noteworthy lots, it's not to be missed! 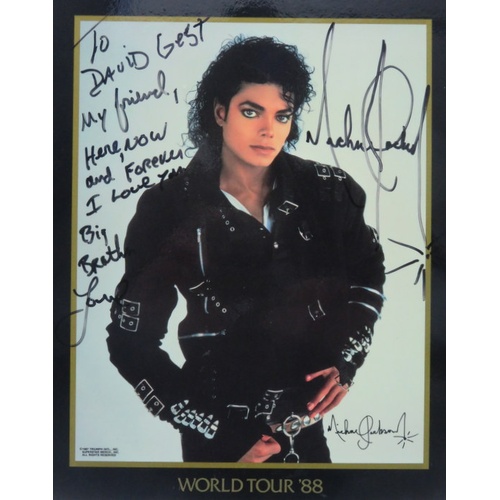 The late David Gest, a celebrity in his own right was a huge fan of pop memorabilia amassing an impressive collection of signed items, scripts, and merchandise in his lifetime. The majority of this collection was housed in 3 storage units in Liverpool. and is due to go under the hammer with auctioneer Cato Crane on the 8th and 9th of July.

Gest had some famous friends including Michael Jackson, it was in fact MJ that encouraged him to collect memorabilia telling him it wasn’t junk. The sale includes over 800 lots, which feature an unpublished biography by Gest himself, OK Magazine Photo album of David Gest and Liza Minnelli, a Buzz Aldrin signed photo, Michael Jackson signed photo and many more lots such as slides of John Barrowman, Christmas cards from the royal family, posters, music sheets, scripts and more.

"He came across as a bit eccentric but really was a genius, he loved Liverpool and felt very comfortable and at home here."

Mr. Crane says the lots amount to "a serious collection, not a load of random items, which has taken them about a year to put together".

"Every item means something to David – whenever he met someone, he would get them to sign something. He genuinely loved pop memorabilia."

He believes that the unpublished biography could draw the most interest of all the lots on the days of the sale next month, but there are numerous noteworthy lots among the sale.

David Gest started his own PR management company after being encouraged by soul singer Al Green to do so, Al then became his very first client and mentor. In later life, David went on to star in reality TV shows here in the UK such as I’m a celebrity get me out of here and celebrity big brother, which brought his quirky personality into the limelight here. David Gest sadly passed away in 2016 after suffering a stroke.

The auction has already attracted a lot of attention. You can take a look at the full catalogue here, more lots are to be added at the time of writing.