Nazi memorabilia withdrawn from auction raises questions about the moral and ethical profit of items relating to the Holocaust. 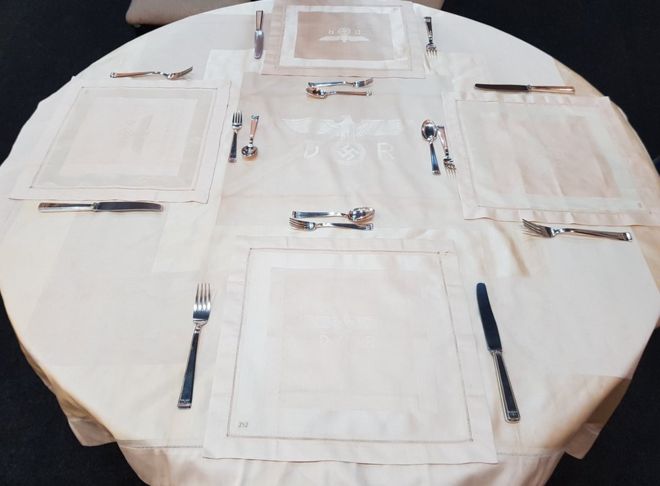 Items recently listed with an auctioneer in Northern Ireland have brought in to question the moral obligations of auction houses once again.

We have recently seen items containing ivory and animal bones withdrawn from sales after public outcry, this time the items causing a stir relate to Nazism.

The items included a silver cutlery set, table cloth, napkins and plates emblazoned with swastikas. The items had been part of a dining service on the Deutsche Reichsbahn (the German national railway), they were presented to the dictator on his 50th birthday. The items, which were owned by a collector local to the Irish auction house.

Selling memorabilia linked to the Holocaust is obviously somewhat contentious. Questions around whether people should profit from the suffering of millions of people have been raised time and time again. It is actually illegal to sell such memorabilia in Germany, France and Austria, but not in the UK.

The three largest auction houses in the world, Christie’s, Sothebys and Bonhams all refuse to sell items connected to Nazi Germany. The question remains, should other auction houses follow suit?

The pieces were valued by the auctioneer at £20,000 and are were due to go under the hammer on Tuesday 12th March.

The auctioneer posted the items on their Facebook page, where they received a negative response.

Karl Bennett, managing director and auctioneer at Bloomfield Auctions, and said the items had historical value and were not intended to be sold to Nazi sympathisers.

"I understand that for some it can be deemed offensive while others appreciate the historical value of it all," he said.

"It's not sympathisers who collect this type of stuff.

"It's generally people who appreciate the historical value, and that dark periods like 1939-45 should never be forgotten about.

"We're hoping pieces like this can go to a museum or another collector who appreciates the historical value."

After much public outcry, the Northern Irish auction houses decided to withdraw the items from sale and said they would not sell similar items in the future. Mr Bennett said:

"In light of the sensitivities surrounding the items, we've taken the decision to withdraw the sale, and they will not be sold by this company in the future."

The debate around whether such items should be sold is obviously one that has strong and divisive opinions. These items are of cultural and historical importance. The table cloth is believed to be the only one in existence, making it extremely rare. Collectors feel that imposing restrictions is a form of censorship upon them.

On the flip side, the events of the Holocaust are something which affected millions of families, the effects of which still ripple through today. Should people be able to profit from the sale of these items? It’s a moral and ethical question, which seems to cause more problems than it answers.

The Campaign Against Anti-Semitism said the auction "plays straight into the hands" of groups that "fetishise relics like these".

"It is incumbent on auction houses to ensure that the trade in Nazi mementos is stamped out," added a spokesman for the campaign group.

"Instead of seeking to earn a commission, the auction house should have had regard for the survivors of the Holocaust and the families of its victims, who will be distressed and repulsed by this sale."

Ultimately, these items exist, the fact that they are the result of a regime that hurt so many people make them controversial. While some people sympathise with the Nazi ideal, they are in the minority. Should items like this be given to museums and historical societies to preserve them, or should individual collector’s be able to buy and sell them as they wish? This question will probably be asked more frequently in coming months and a decision will have to be made by auctioneers individually about their stance, and perhaps even the government. What do you think/