Two upcoming sales on Saturday, May 15th, offer an eclectic mix of memorabilia and furniture.

Two upcoming sales on Saturday, May 15th, offer an eclectic mix of memorabilia and furniture. Sean Eacrett’s sale of the contents of Killinagh Lodge includes what the auctioneer calls some “chancy” lots of oriental artefacts from the collection of Xandria Williams.

Not everyone can trace their ancestors back to 430AD, but Xandria Williams is not a run of the mill woman. The 80-year-old can trace her family’s lineage back to a combatant in William of Orange’s army at the Battle of the Boyne when a daughter of the Williams of Brecon Castle in Wales was sent to Rosslare and married a local chieftain.

A note in her family bible says a captain also came from Brecon Castle with William of Orange and fought against the troops of King James at the Boyne. This captain built Williamstown House near Carbury in Kildare, the Palladian manor attributed to Nathaniel Clements – and where Killinagh Lodge was constructed – when the Williamstown estate was sold. 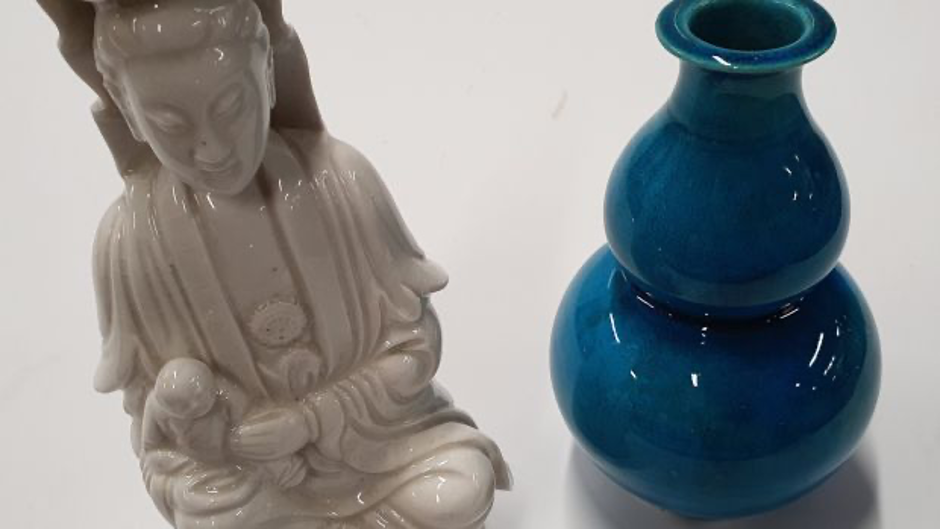 But Williams says she can also trace her family roots back to the fifth century to the first king when the Romans left the United Kingdom. The ring she wears daily bears two seals: the family crest, which she says was given by Henry VIII and ratified by Elizabeth I, and the flip side is an individual crest and seal.

Now based in London, the Dublin-born octogenarian is still working as a naturopathic medicine chemist from her practice in the UK. Her work as a mining geochemist took her all over the southern hemisphere until she returned to Ireland to take care of her aunt Shelagh who passed away in 1999.

She remained at Killinagh Lodge, taking care of her uncle after her aunt died. In her tenure at Killinagh, she became the first breeder of alpaca in Ireland, where she ended up with 130 of the South American mammals, and now says it breaks her heart to sell the lodge and its contents. However, the combination of work, a new hip and the pandemic have restricted her movements over the past two years.

The highlight of the sale is a painting dating from the mid-1700s of Williams’ ancestor Mary Ann Williams, the second generation from the family who arrived for the Battle of the Boyne (lot 735, €1,500-€2,500).

Register to bid live across the entire sale here.