A Brief Guide to Moorcroft


We take a look at Moorcroft Pottery. 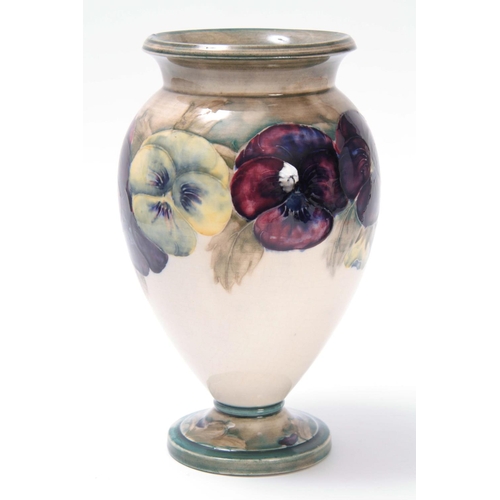 The vase above is listed with Hutchinson Scott for sale on September 26th 2019.

Most people have heard of the name Moorcroft and associate it with beautiful pottery with Art Nouveau influences. William Moorcroft was born in 1872, the son of a china painter from Burslem, it seems his skill was in the blood.

His career began in 1897 at the age of just 24 when he was employed by James Macintyre & Co as a designer. His skill was quickly recognised and within just a year at the company, he was in charge of the company’s ornamental ware department. It was during his employment here that he became known in his own right for his Florian Ware, setting him on the path to success.

Within just seven years he had won a gold medal at the St Louis International exhibition for his trailing slip method known as tube lining. William’s designs were popular and his own success renowned at this point.

It was in 1912 that he decided to open his own art pottery in Cobridge. Backed by the famous Liberty & Co of London he went on to become famous in his own right.

Just as he inherited his talents, it seems his son also followed in the family footsteps. In 1935 Walter Moorcroft joined him at Moorcroft Pottery and took over the company in 1945.

Moorcroft is still produced today. The earlier pieces are where the substantial values typically lie, although some more recent pieces such as Sally Tuffin’s run in the 1980s can also fetch good money.

Moorcroft designs are known for their beautiful rich vibrant colours which have depth thanks to the way they are created. The designs are transferred onto the pots and then the slip trailing method is used to go over the lines. Colour is then added before the pots are fired and then glazed which gives them their unique depth of colour.

The early Art Nouveau / Arts & Craft designs are the most coveted. William’s stint at Macintyre produced some highly desirable designs such as Poppy, Hazeldene Landscapes with trees, Claremont with the Toadstool and Tudor Rose.

The post-Macintyre designs under Moorcroft pottery which are the most desirable include Moonlight Blue, Eventide and Dawn which won acclaim at the Paris exhibition of 1925 for reflecting the Art Deco period.

His son’s work is typically identified by large floral designs and can again be collectable and valuable.

Prices for Moorcroft can vary greatly depending on the items themselves. You can, in fact, pick up some Moorcroft for as little as £20, while other more desirable designs can fetch five figures per piece! A Macintyre Hesperian Ware jardinière and stand sold by Sotheby’s in 2002 sold for a staggering £28,000!

Some patterns can be difficult to date as they enjoyed a long production run. The date and pattern of a piece can make all the difference in pricing, so it’s important to look out for printed marks on the pottery, paper factory labels if possible and signatures. William Moorcroft took pride in his work and was responsible for all aspects of production from 1903 with the advent of the Florian range. Almost all of these pieces carry his hand-painted signature.

If you fancy picking up some Moorcroft of your own you can browse through the current listings here.